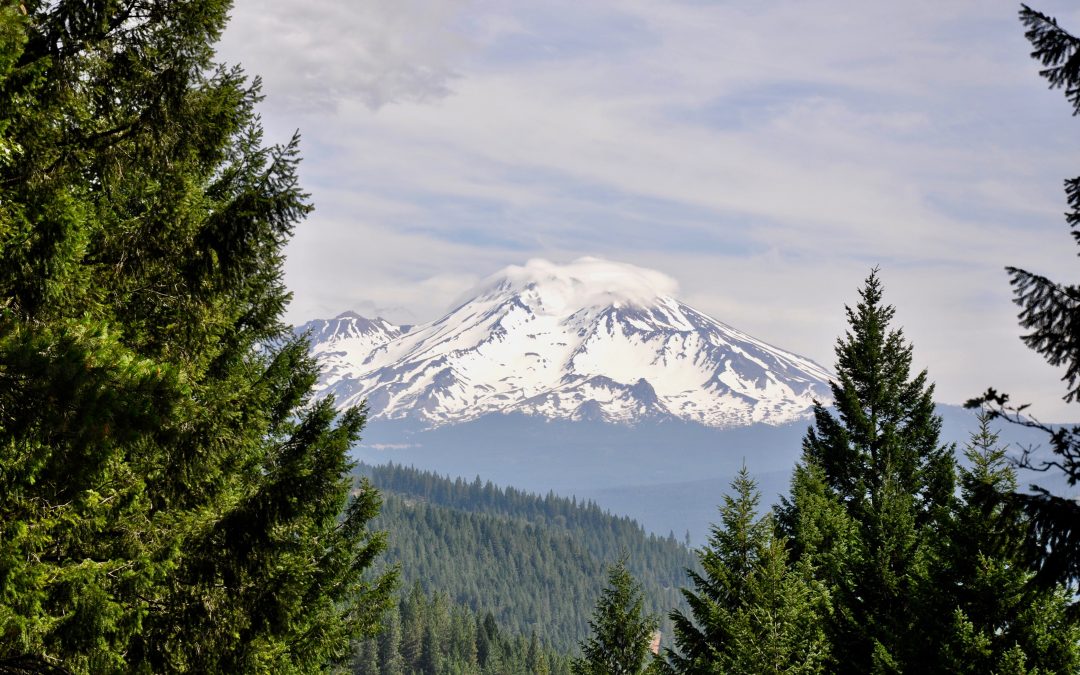 For the last leg of our journey, we left the rugged, chilly coastline to venture east to northern California’s volcanoes. The two areas couldn’t have been more different than each other. And the four-hour drive between them was alternately wildly beautiful and utterly devastated. 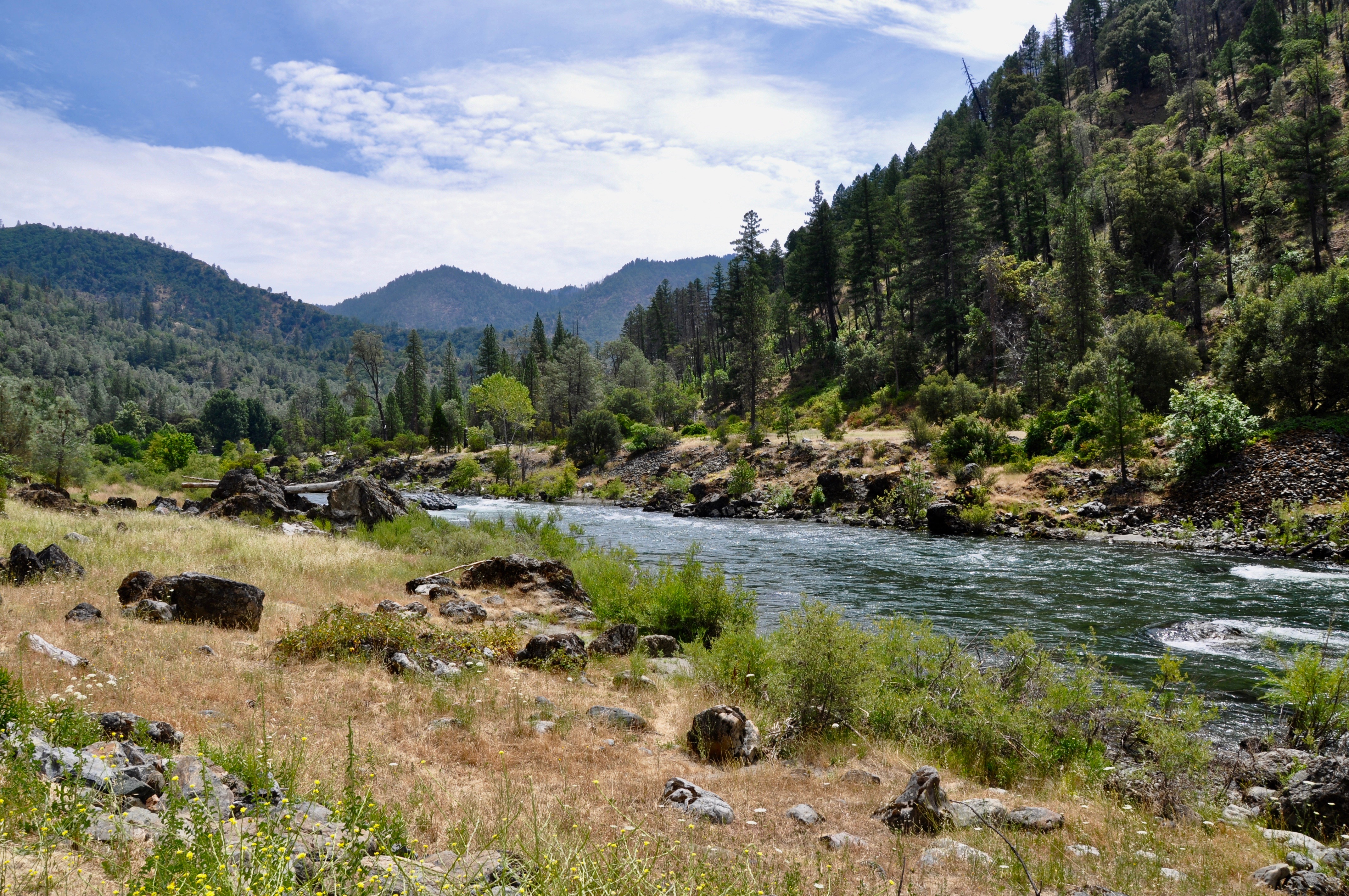 Highway 299 cuts its way east across the mountains, paralleling the scenic Trinity River for much of the route.The river is a great location for salmon and steelhead fishing. The drive itself is beautiful, some of it passing through a National Forest, with only a few towns popping up here and there. We picked up coffee in Big Bar at Strawhouse Coffee Shop then made a stop in Weaverville (pictured below) to tour the Jake Jackson Museum and get a peak at the Joss House Chinese Temple. We also popped into the Forest Service Ranger Station, where the kids loaded up on Smoky the Bear paraphernalia. 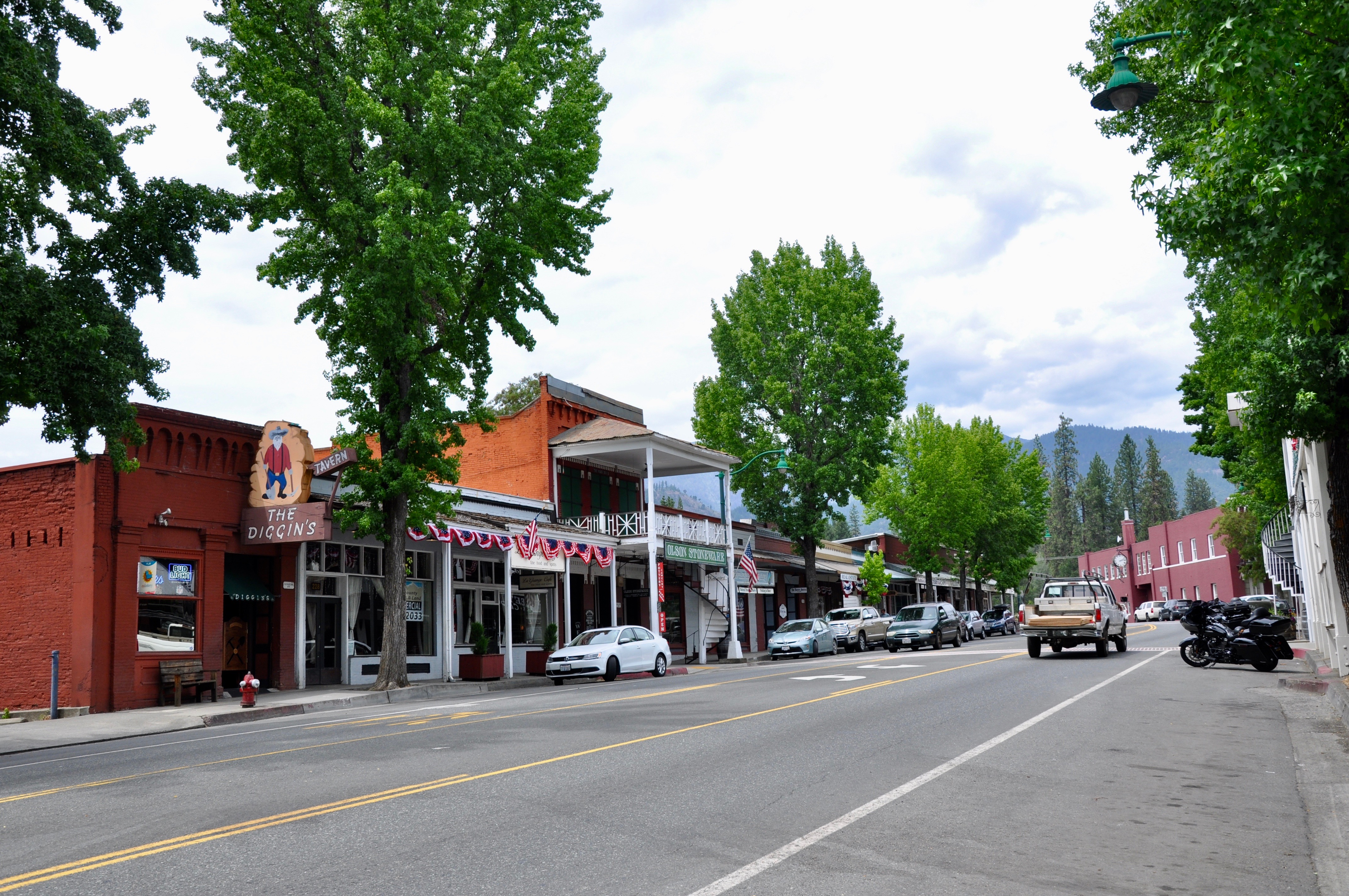 Once we passed Lewiston, the landscape changed to charred trees and bare mountains, evidence of the 2018 Carr Fire. Whiskeytown Lake National Recreation Area was at the heart of the fire, which began with a flat tire and a spark coming off the rim when it hit pavement. Nearly 93% of the park was burned and much of it remains closed today. We did find a nice trail down to the lake from the Visitor’s Center though. East of Whiskeytown, we came across Shasta State Historic Site, a ghost town from the days of the California Gold Rush. 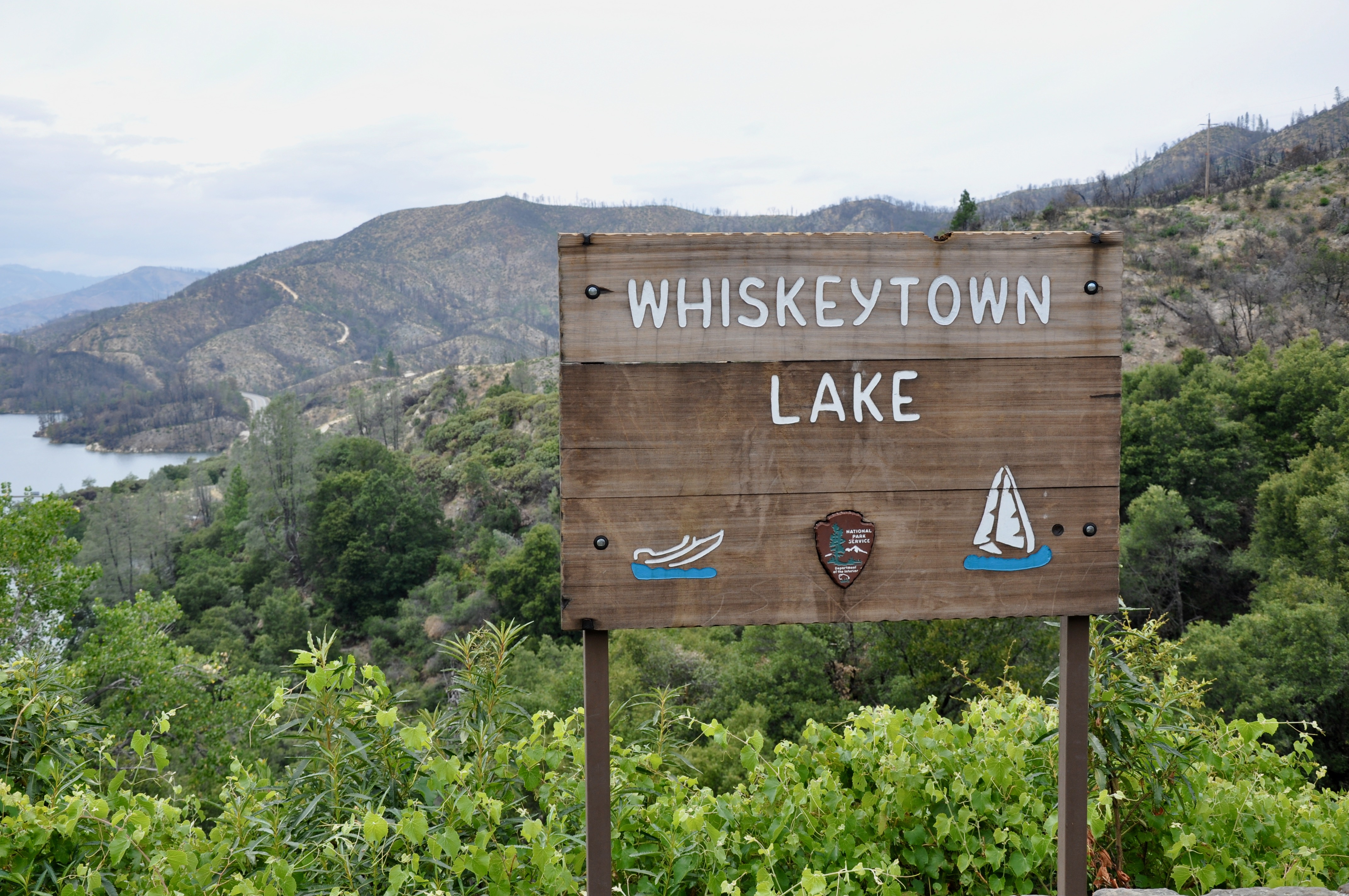 Ready to find our Airbnb in Dunsmuir, we didn’t have time to explore Redding. We did spy the famous Sundial Bridge from a distance, though. And we caught our first glimpse of Mt. Shasta after turning north on I-5. The impressive volcano dominated the horizon during our stay in the area. 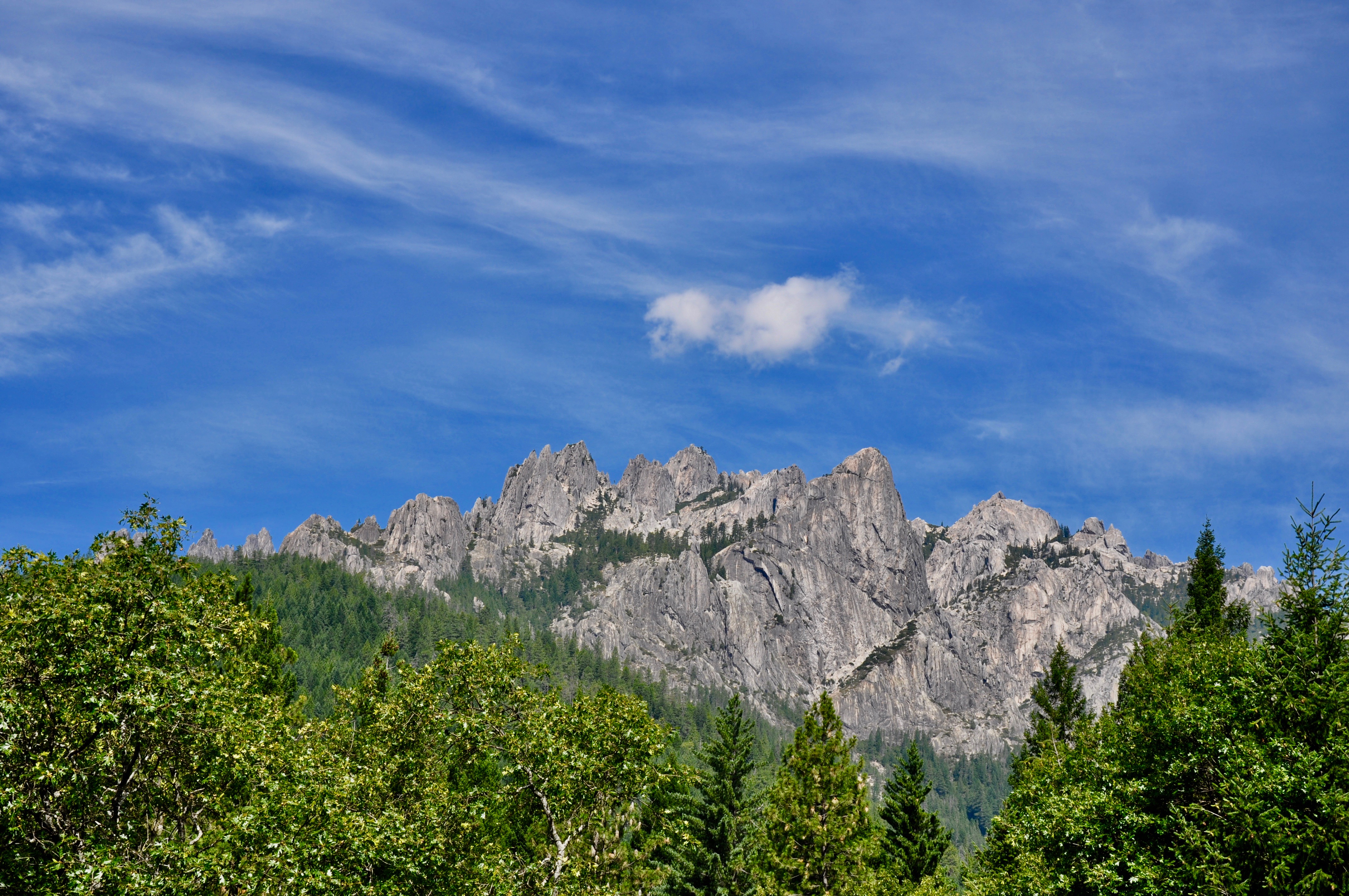 The granite outcroppings of Castle Crags State Park are just down the road from Dunsmuir. The 2,650-mile Pacific Crest Trail passes through the park, but we opted for the one-lane drive up followed by a short hike to the Vista Point. Afterwards, we went fishing in the Sacramento River, which flowed right beside the campground and the area’s natural mineral springs. 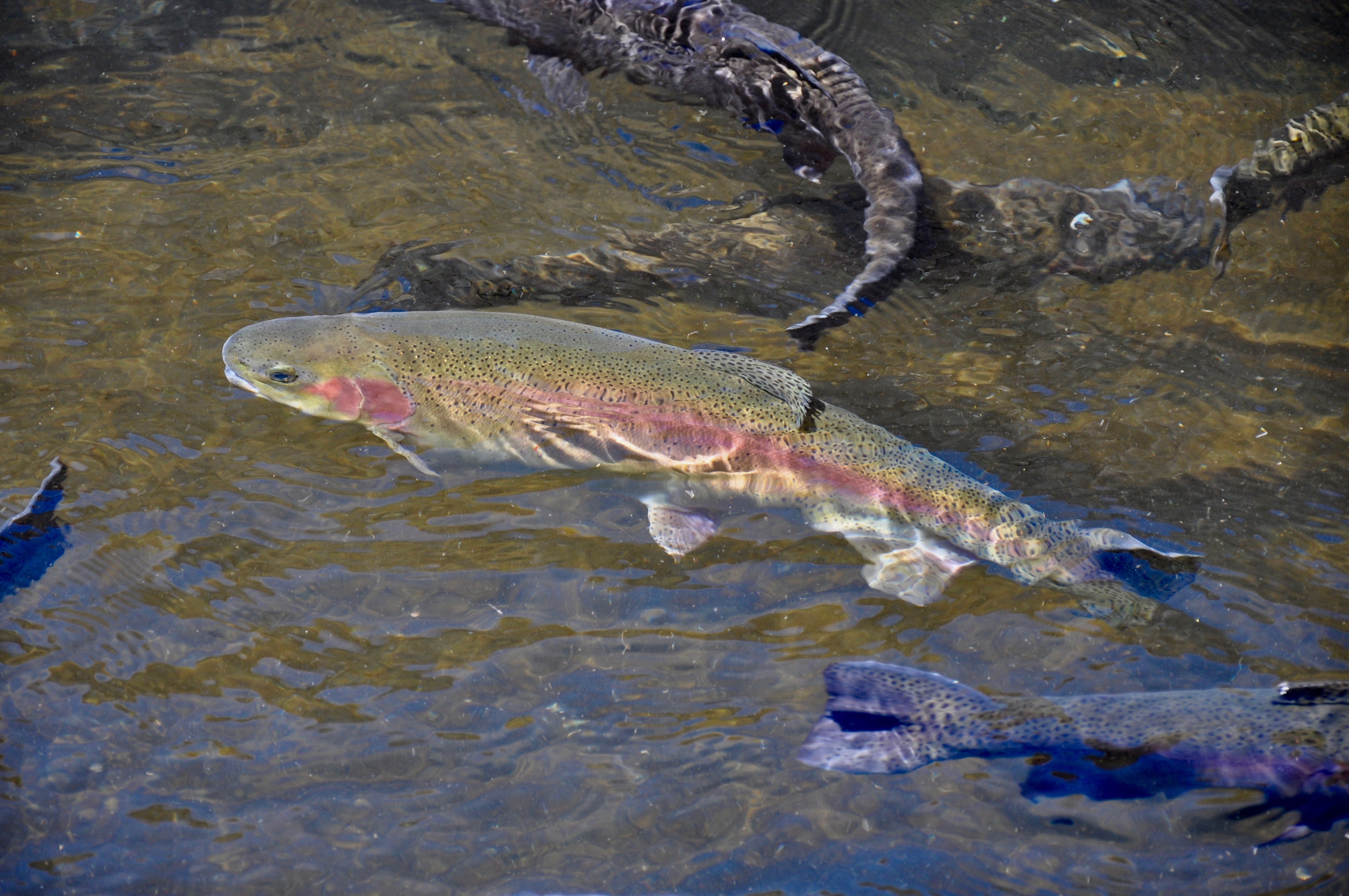 An unexpected highlight of our trip was the Mt. Shasta Fish Hatchery and Sisson Museum. The trout hatchery is the oldest west of the Mississippi and features rows of ponds with varying sizes of fish. Here you can grab a handful of food and watch the trout churn up the water while vying to catch some dinner. The Museum was a wealth of information on the town of Mt. Shasta, the volcano, the railroad and pretty much anything else in the area. But the best part was the multiple play options for kids. They could climb aboard an old fire truck using the hoses to put out fires, crawl through tunnels, play dress up in an old cabin, watch the model trains or spend hours in the kids’ playroom.  It’s the one spot our five-year-old begged to return to again and again. 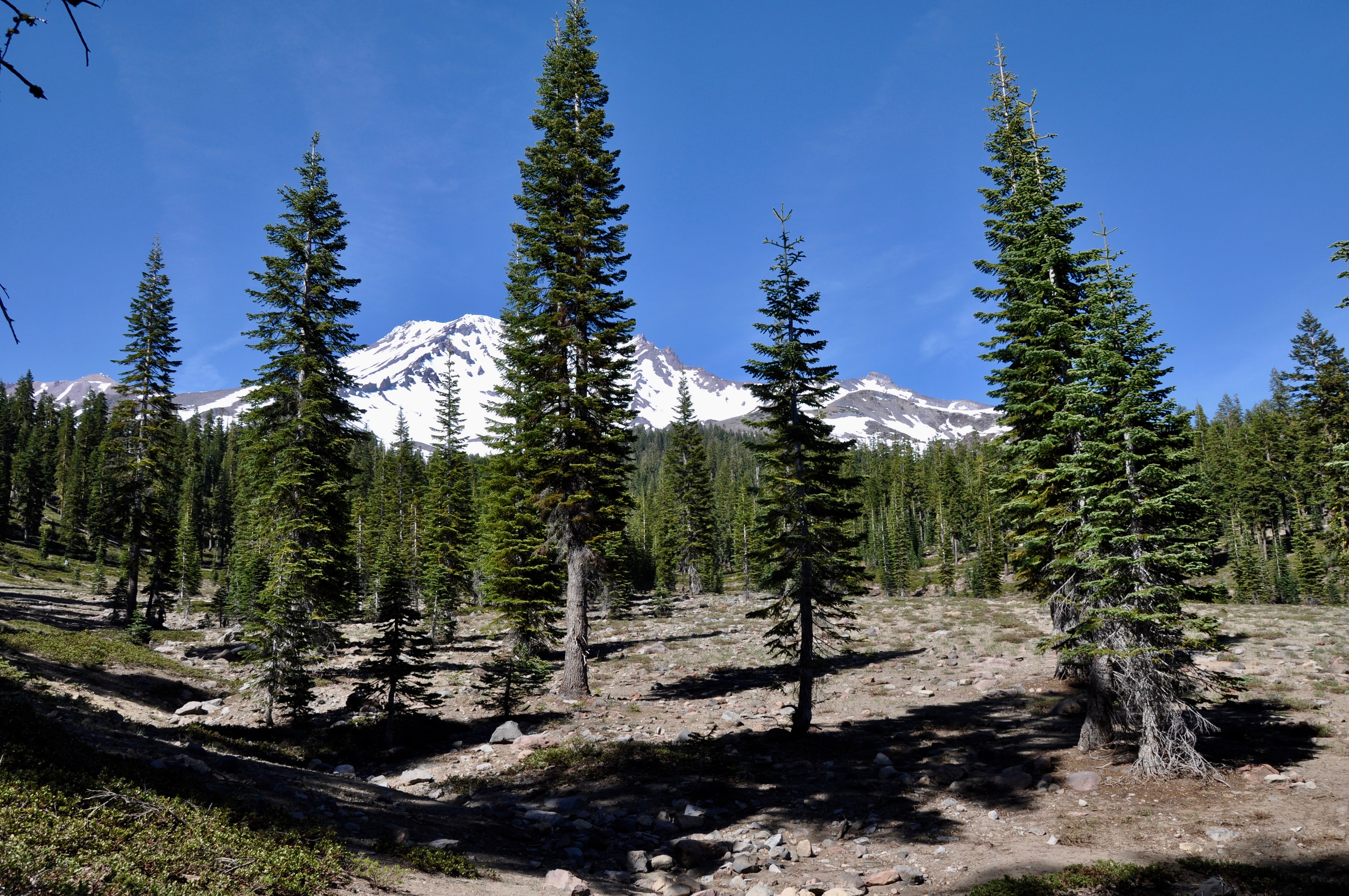 Our journey was always leading us to Mt. Shasta itself. The volcano rises to 14,179 feet and boasts seven named glaciers. We drove up to Bunny Flat trailhead, past a magnificent row of sequoia trees planted ages ago. The parking lot was a general zoo of hikers, but we didn’t have to travel far up the trail before we lost sight of the majority of the people. We took the Horse Camp Trail, only intending to go far enough to find some patches of snow. Several hikers carrying skies passed us along the way, intending to hike the summit and then ski back down. 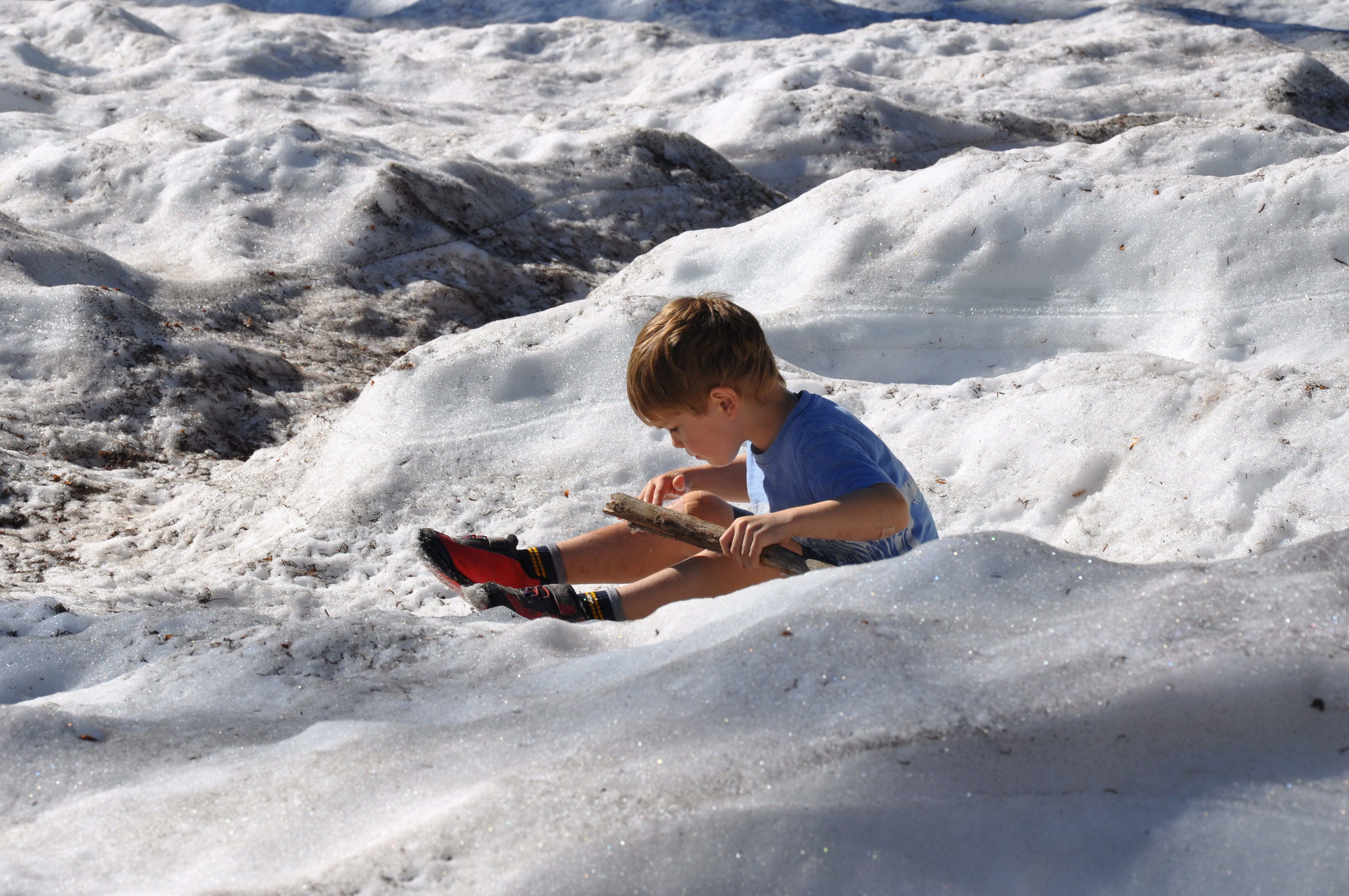 We pushed on farther through the trees, our youngest actually leading the way to find more and more snow (a rare sight for Louisianians). Before we knew it, we had hiked up to the Sierra Club’s Shasta Alpine Lodge at 7,884 feet. The views from here were stunning, with snow blanketing the ground and a fountain of spring water bubbling up for travelers. By the time we made it back down, we had hiked nearly 3.5 miles up and back–a feat for three boys used walking around below sea level! We celebrated our accomplishment with “Gummy Bear Burgers” and “Make Me Want to Cry Garlic Parmesan Fries” from Yaks. 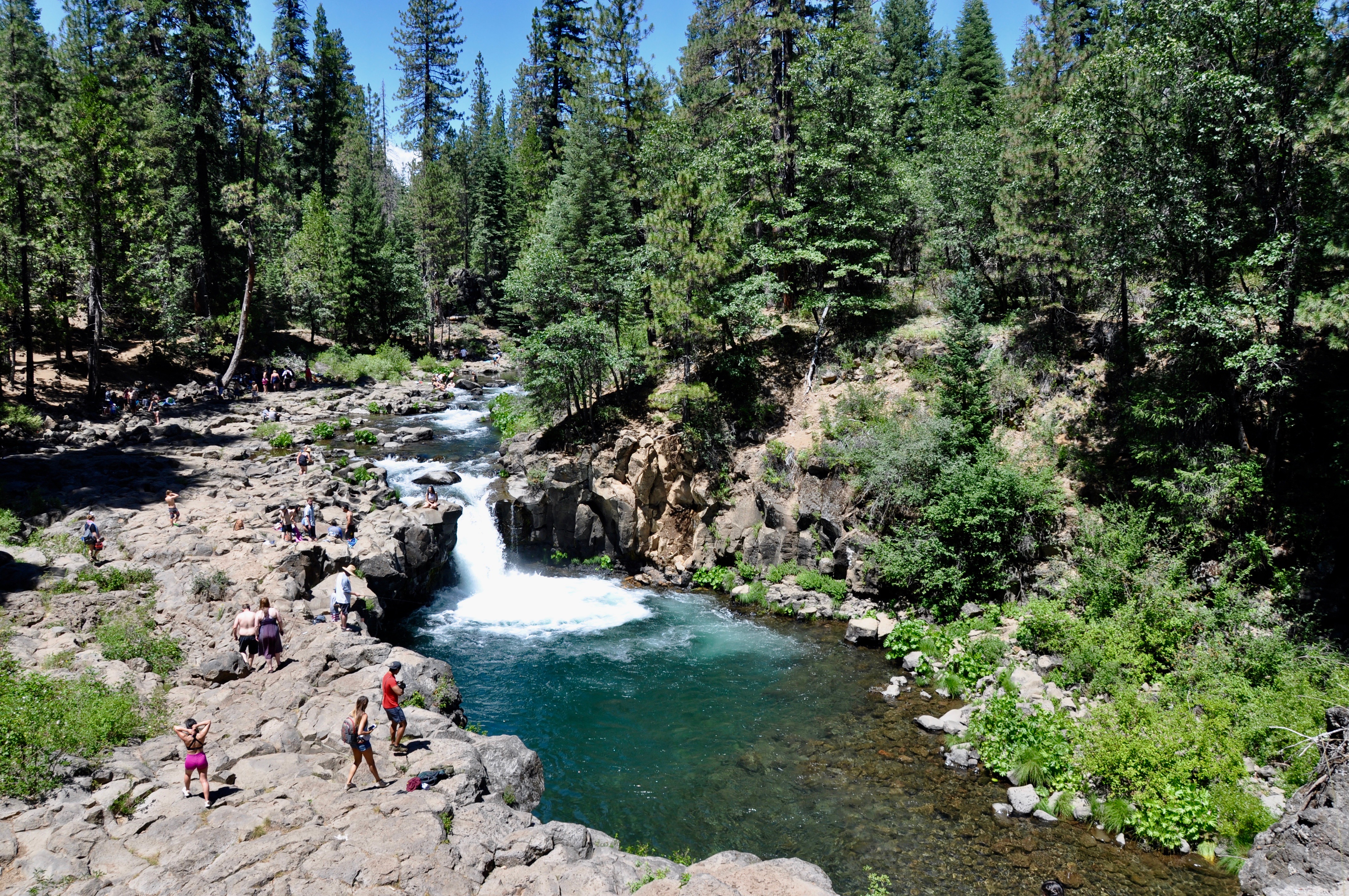 Highway 89 led us past the small town of McCloud, which featured a quaint Main Street complete with an historic inn and an old-fashioned candy store. Nearby McCloud Falls offered three sets of falls – Upper, Middle and Lower – all with separate parking lots or you can hike the 3.5 mile round trip trail between them. Lower Falls (pictured here) was pretty busy, with people swimming, picnicking and fishing all along the clear, cold water. Middle Falls was a short walk to a nice view of the wide, impressive falls, while Upper Falls gushed out between a rock canyon. 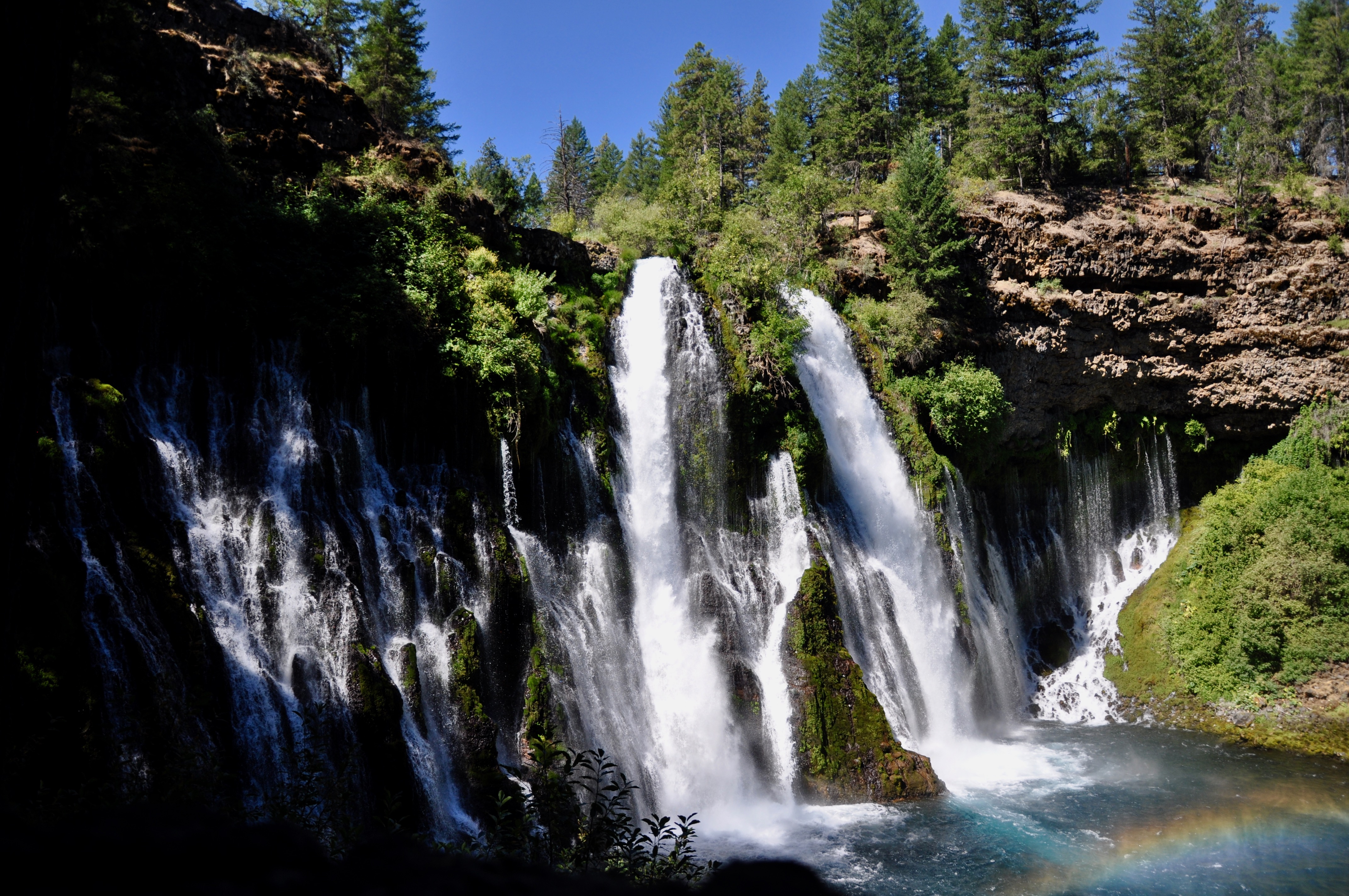 Hands down the most beautiful waterfall in this general area is Burney Falls. A hundred million gallons of water a day flows out of the 129-foot falls, which are so impressive even the kids stopped to stare in awe. Porous, volcanic rock holds much of the water in an underground reservoir, and it then comes back up through springs, feeding into the falls, Temperatures dropped dramatically on the hike down to the waterfall’s base, where we all stood shivering in the mist. Look for the black swifts darting about, often disappearing to their nests behind the falls. 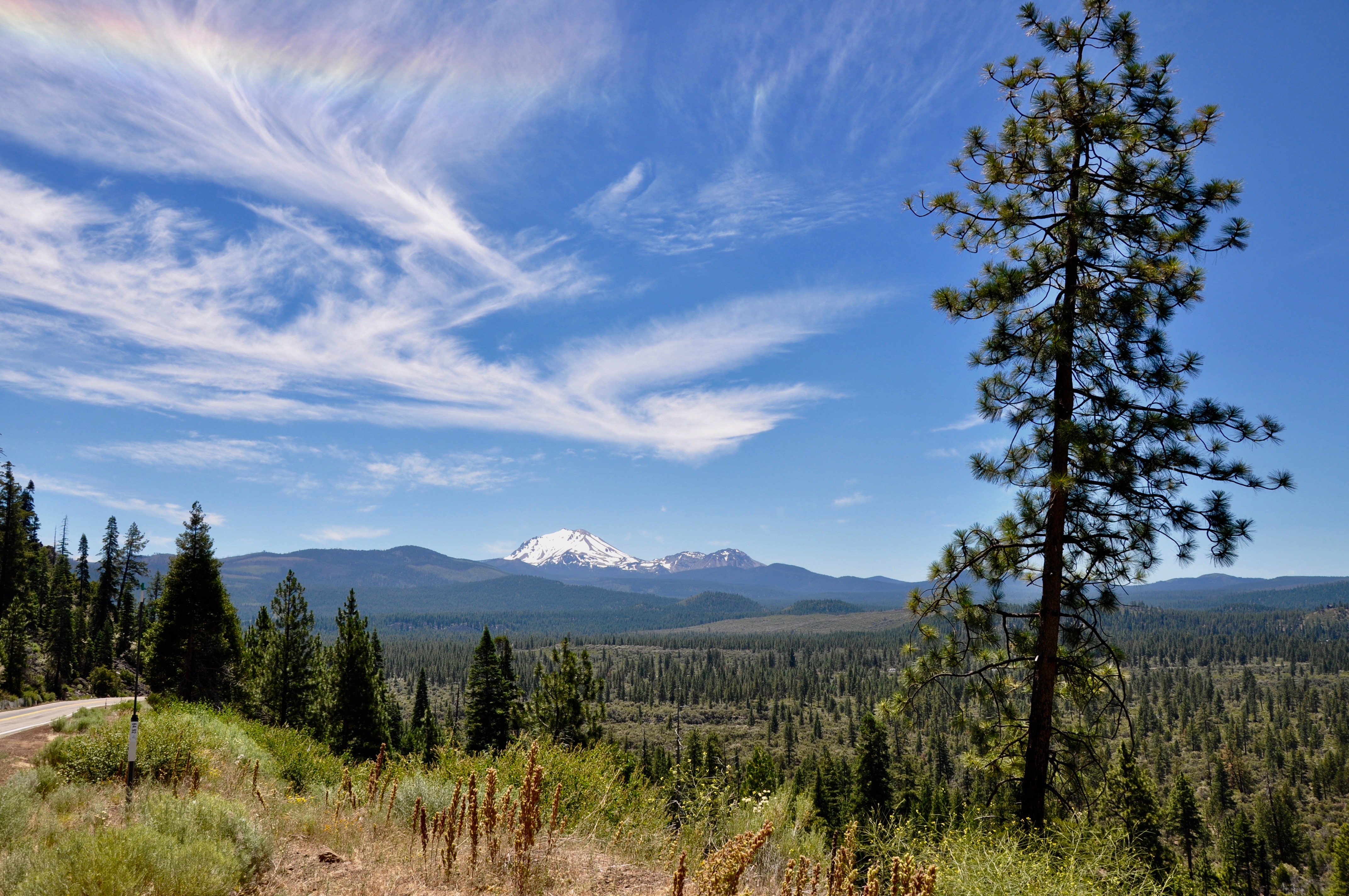 Our last adventure before heading back south to San Francisco was the other-worldly Lassen Volcano. From San Fran, up the coast to the redwoods and across the state to Mt. Shasta, people were everywhere – enjoying the views, the weather and the summer. But Lassen was a different story. Only a handful of cars accompanied us on our drive south, and much of the landscape still reflected the barrenness leftover when Lassen erupted several times between 1914 and 1917. 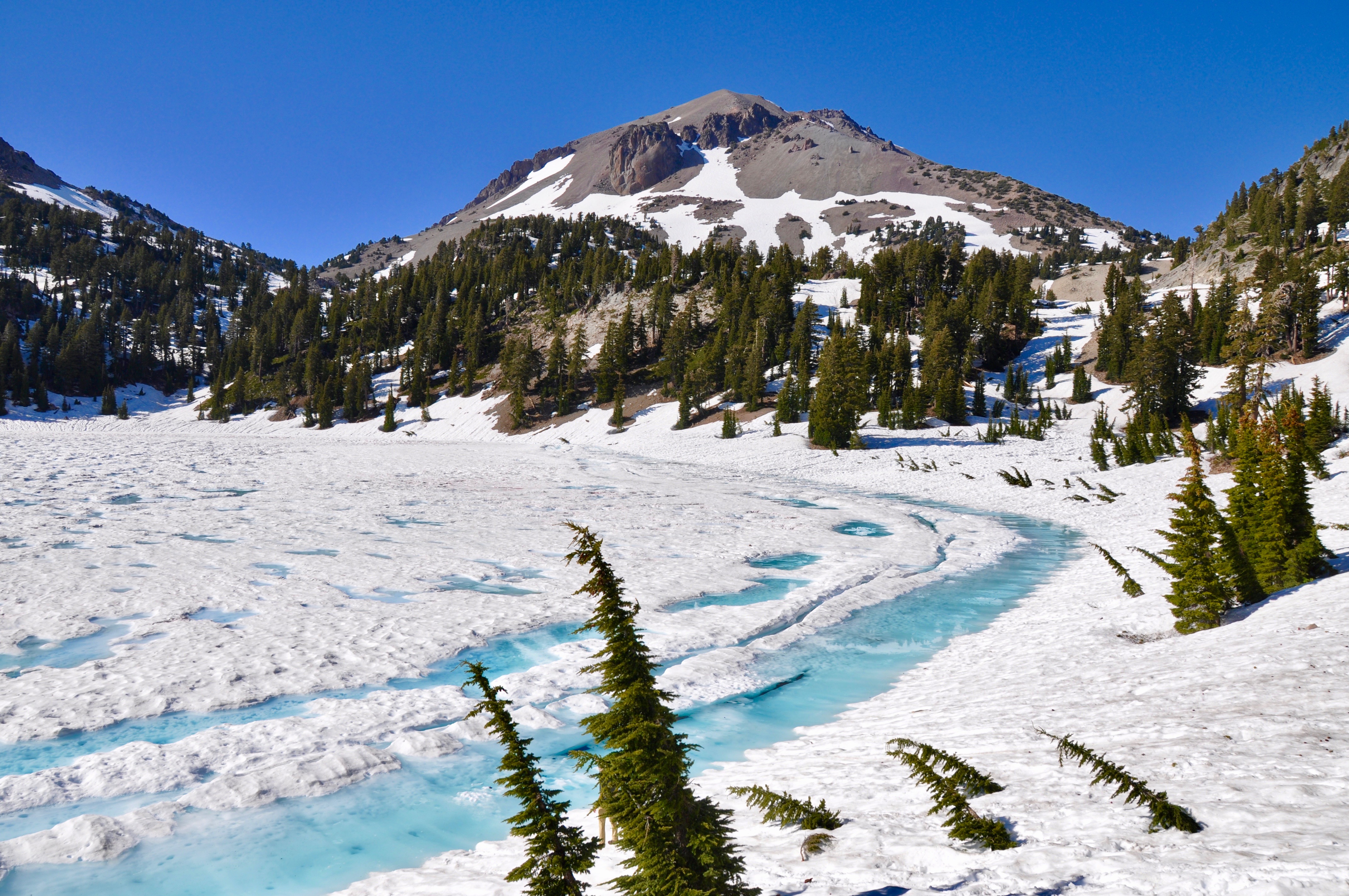 The main road through Lassen is closed much of the year due to heavy snow. Many of the campgrounds are only open June through September. Even in July, our “bathroom stop” at the Lake Helen picnic area revealed only the roof of the bathroom – the rest covered completely in snow. Lake Helen was still frozen over. It was quite a sight for us southerners, who rarely even see snowflakes. In some places, where the roads or parking lots had been plowed, the snow pushed aside stood upwards of 30 feet. 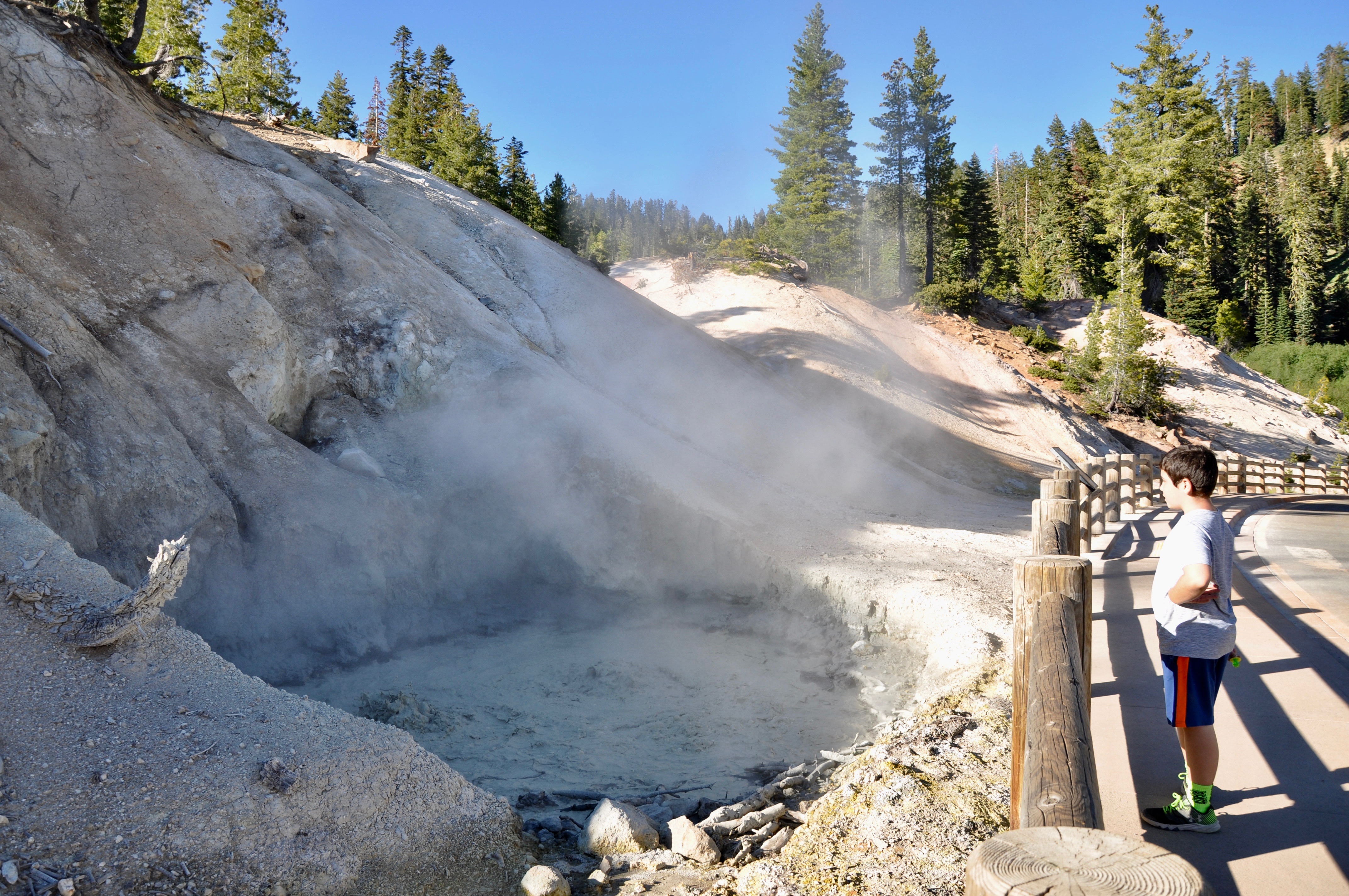 Lassen Volcano is still active, as evidenced by the several hydrothermal areas throughout the park. It’s part of the Cascade Range, which includes Mt. St. Helens and Mt. Rainier.  Bumpass Hell is the best known trail for seeing steam vents and boiling pools, but unfortunately it was closed for renovations while we were there. Sulphur Works is just inside the southern entrance to the park and offers easy access to a bubbling mudpot. 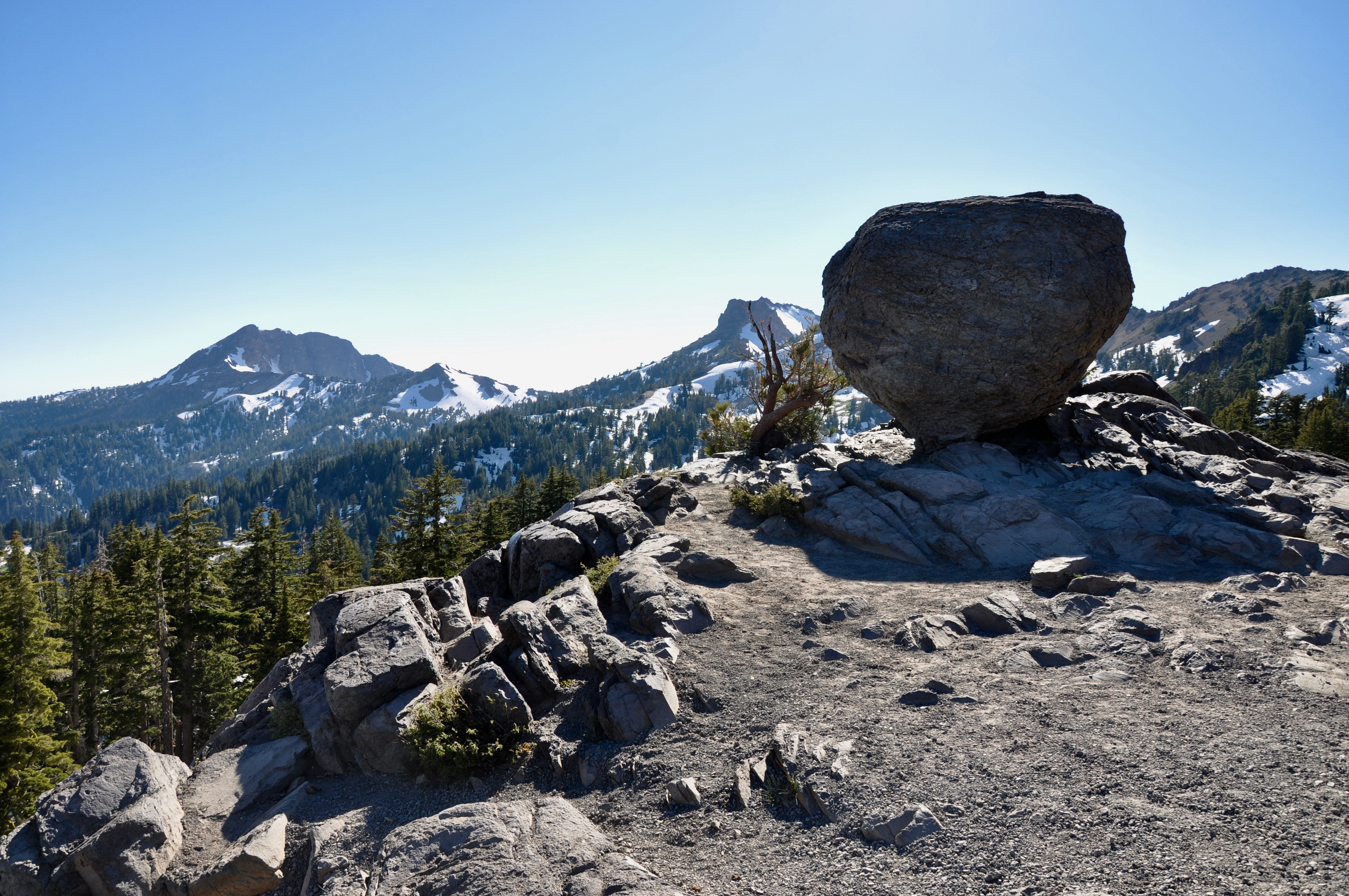