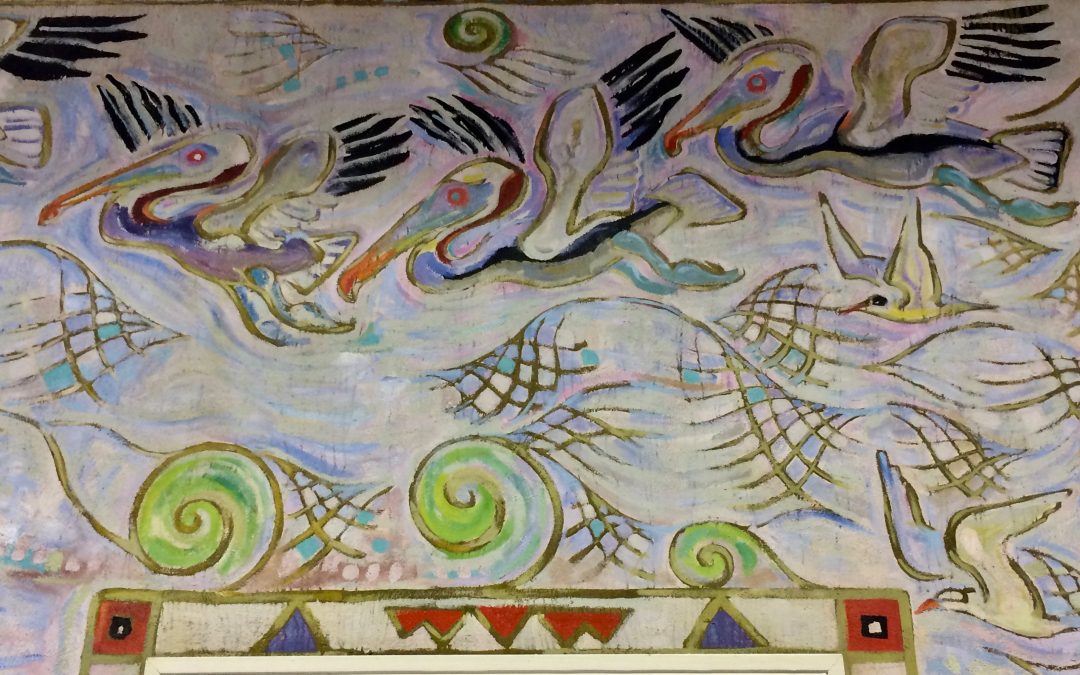 A short day trip from New Orleans, Ocean Springs is one of those small towns for which America is famous. Its historic downtown has quaint shops and restaurants lined up along a walkable main street, jutting off perpendicularly from a railroad line that runs straight through town. 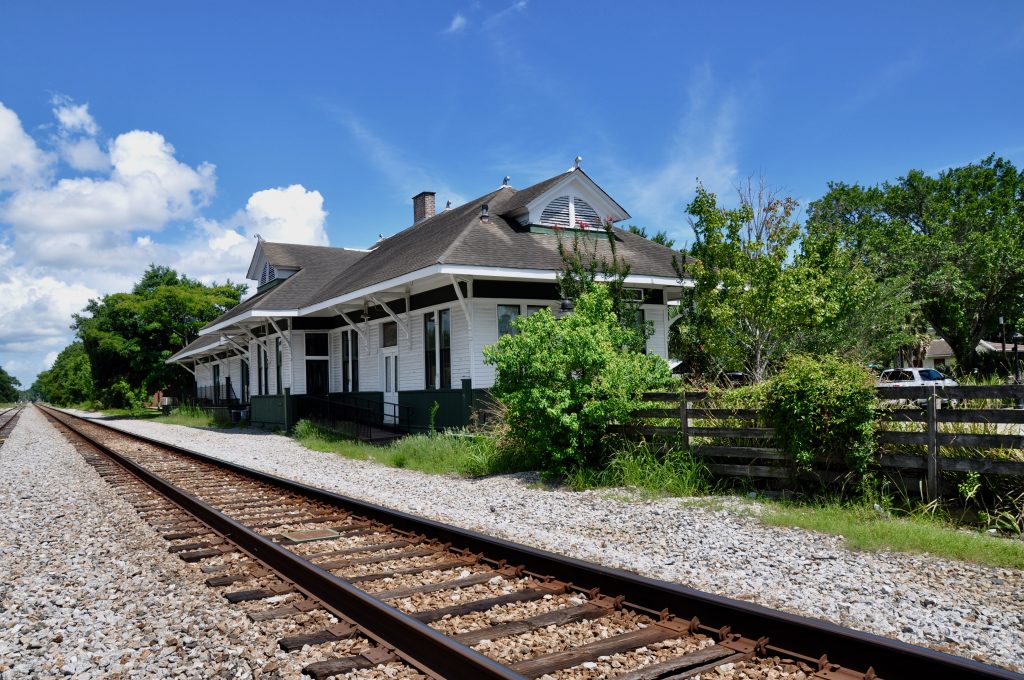 We went to Ocean Springs to learn about its most famous resident—Walter Anderson. A schizophrenic turned recluse, Anderson was a brilliant artist in the mid-1900s known for his colorful and quite fanciful paintings. Our first taste of his artwork was inside the old train depot next door to the Visitor’s Center. Run by Anderson’s family, “Realizations” has turned his kid-friendly designs into t-shirts, purses, bookmarks, posters and more. After buying some new tees for our boys, we scooted outside to the Saturday Fresh Market taking place in the depot’s parking lot (every Saturday 9 a.m. – 1 p.m.). Here, we sampled homemade goodies and browsed the produce and plants for sale before continuing down Washington Avenue. 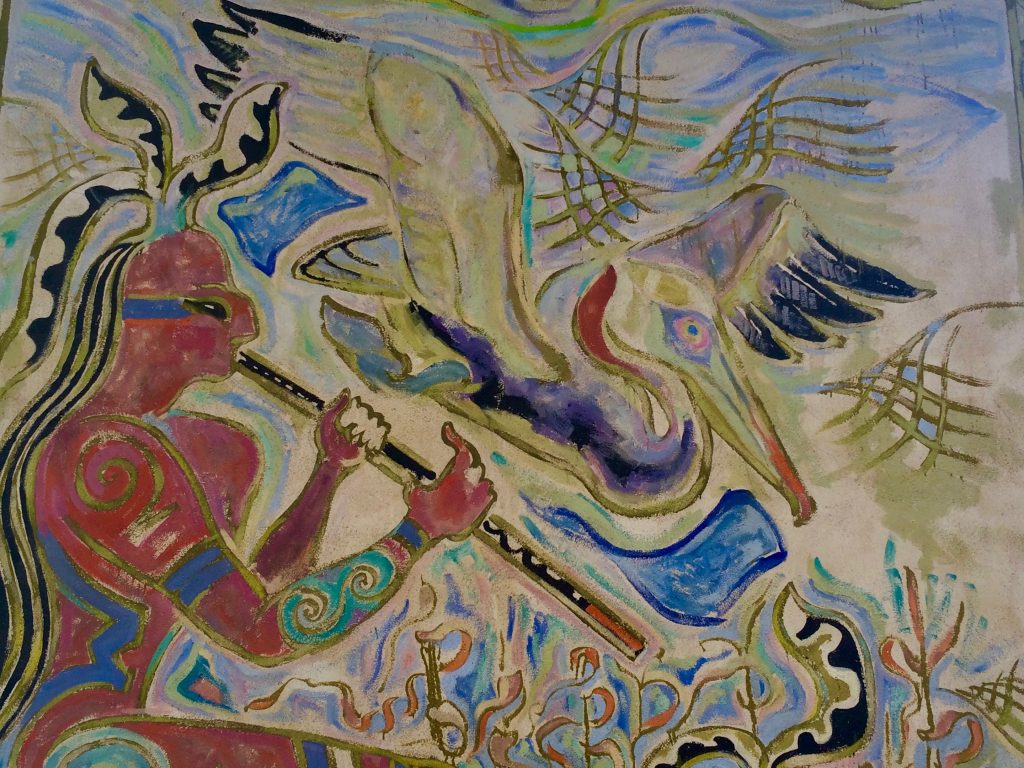 Dedicated to Walter Anderson’s artwork, the Walter Anderson Museum of Art houses more than 1,000 pieces of art. These include elaborate murals depicting his life and discoveries on the Gulf Coast. We stood for an eternity gazing at the Community Center murals, pointing out the animals and scenes hidden within it. Then we marveled at how he created the “Little Room” murals without a sole seeing them until after his death. 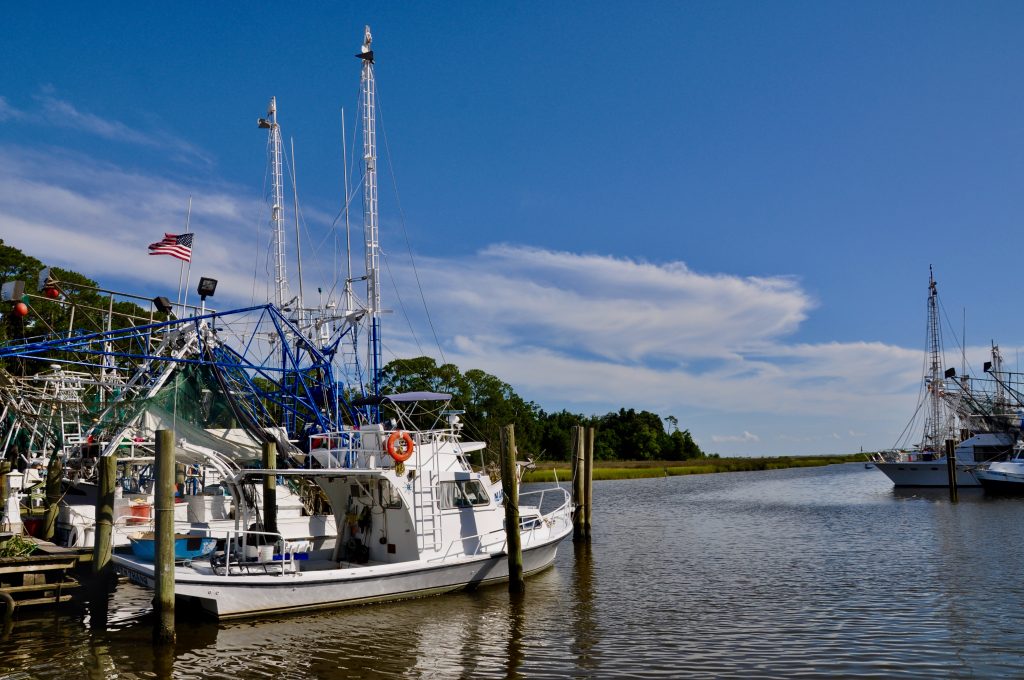 Our next stop took us to the family business. Shearwater Pottery was started by Walter’s brother Peter and is today owned by Peter’s four children. Three of them carry on the tradition of crafting decorative, functional clay pieces. The workshop, annex and showroom are tucked away in the woods close to the water’s edge. The drive to visit the shop is almost as scenic as the pottery itself, as you pass a boat-filled marina on an inlet off the Gulf. 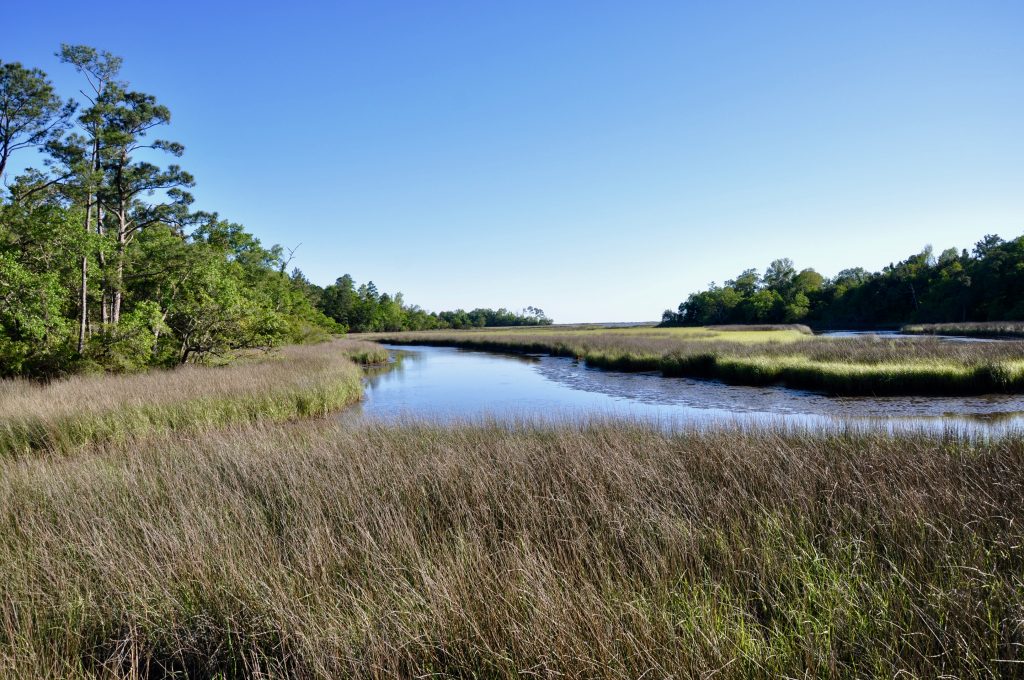 By this point, the kids were starting to get antsy and needed some quality “hyper” time. So we headed off to Gulf Islands National Seashore to hike the scenic, coastal forest trail. They zoomed across the pathways, stopping briefly to search for fish and turtles in the still waters beneath the fishing pier. Then they looped back around to the Visitor’s Center where exhibits detailed the area’s beauty and mystique. 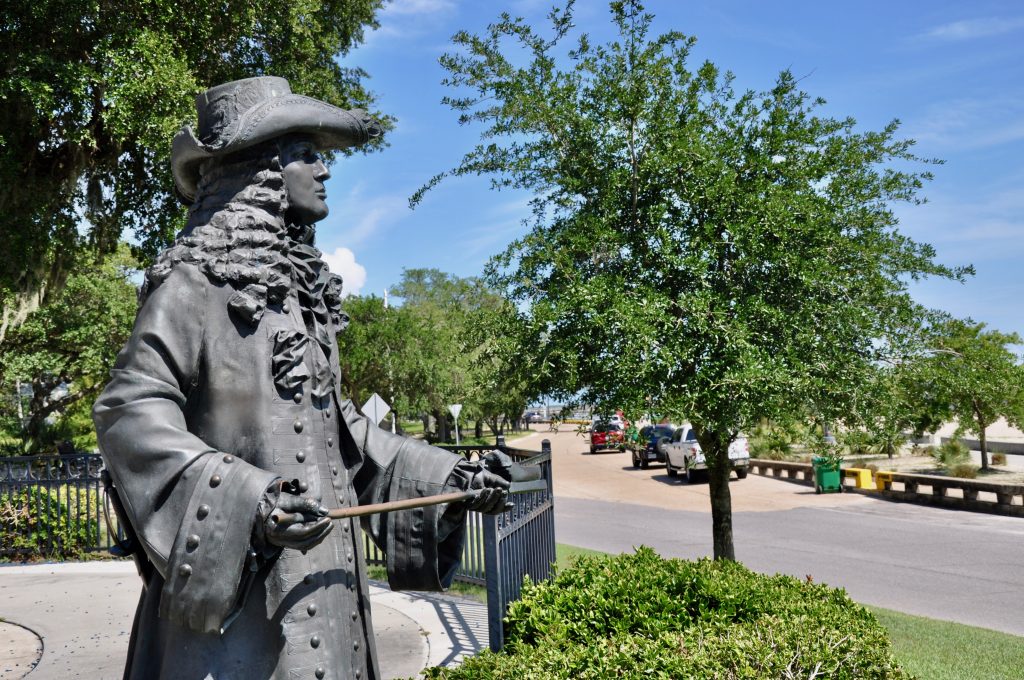 A great place to spend a hot summer afternoon, Fort Maurepas Park on Front Beach Drive overlooks the Gulf. It also features a splash pad and a ship playground. If you bring along a fishing pole, a fishing pier juts out into the Gulf from here as well. Throwing on their bathing suits, the kids cooled off while we sat in the shade and watched the boats go by. The playground rests near the former site of Fort Maurepas. The fort was built in 1699 by French explorer Pierre Le Moyne d’Iberville (pictured here). Fort Maurepas was the site of the first European colonization in Mississippi. In 1719, it briefly served as the capital of Louisiana. 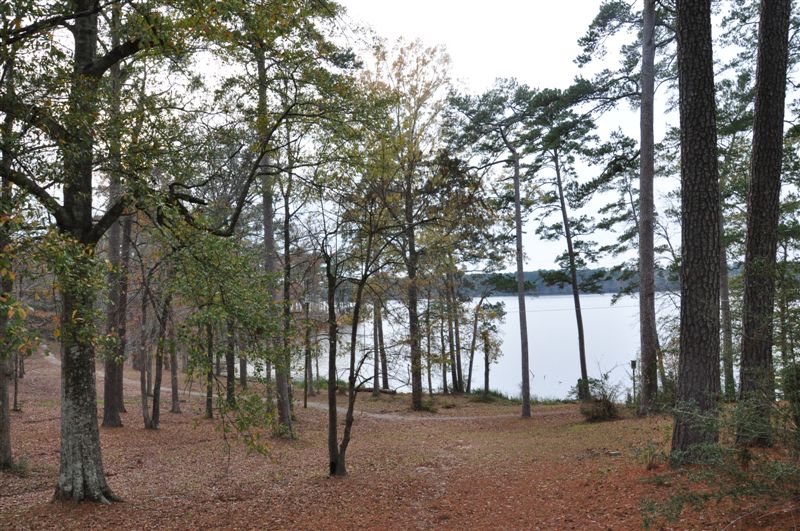 For more than 40 years, my husband’s family has spent a December weekend at a cabin at Percy Quin State Park. Continuing the family tradition, we headed up I-55 toward McComb, Miss., and met the relatives at a large cabin on the lake.

After a quick detour in Manchac for a seafood lunch at Middendorf’s, we arrived at the park by mid-afternoon. The fire was already roaring in the den’s large, brick fireplace. My mother-in-law had hung festive lights and miniature Christmas trees around the great room to make us all feel at home. Everyone quickly dragged in their luggage and claimed their spot in the 5-bed cabin before heading out the back porch and down to the lake.

The 700-acre Lake Tangipahoa, surrounded by fragrant pine trees and a hiking trail, serves as the focal point of this park constructed by the Civilian Conservation Corps in the 1930s. We watched the sun set below the trees and then hurried back inside as the temperature rapidly fell. The evening entailed hot dogs and marshmallow smores roasted over the fire as the children played hide and seek.

Saturday always follows the same routine, with more relatives and friends arriving to spend the day with us. For breakfast, we utilized the kitchen this time and left the fire for warming cold hands and toes. Then we all set off on our annual hike, starting on the paved trail behind the cabin.

Once the sidewalk ended, our group continued following the lake toward the main lodge, where we all took a break for the kids to play the old-fashioned pin-ball machine and video games. With its exposed beams and large fireplace, the lodge, although underutilized, is a beautiful testament to the work of the CCC. Our self-made trail continued through the woods to the playground, passing a raised pipe along the way that has served as a balance beam for as long as I can remember.

This year, with several small children present, we stopped our walk short at the playground, where the kids romped and the adults knocked mistletoe out of the trees. In past years, though, we often set off over a bridge and into the woods a bit before turning back. The afternoon was filled with coffee and conversation, while the older children built a fort in the red cliffs overlooking the lake to our left.

I always look forward to this trip every year, and this one didn’t disappoint. While some things may have changed, such as the flat screen TV we immediately unplugged and the championship golf course by the entrance, all in all, Percy Quin is much the same as usual. Quiet and peaceful, it forces you to relax and slow down. There is nothing spectacular about our trip–no wild adventure sports or amazing discoveries, but somehow it has become one of my favorite times of the year. And as I watched the fog slowly burn off the morning lake, I realized once again that this is a special place. 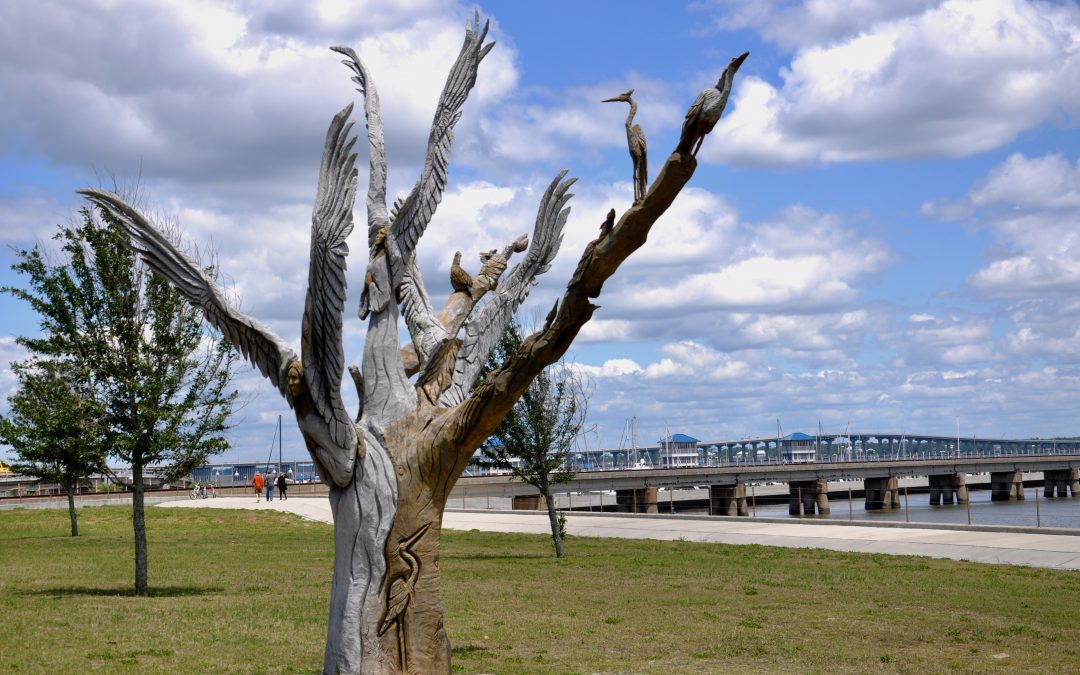