Across the River to Algiers Point 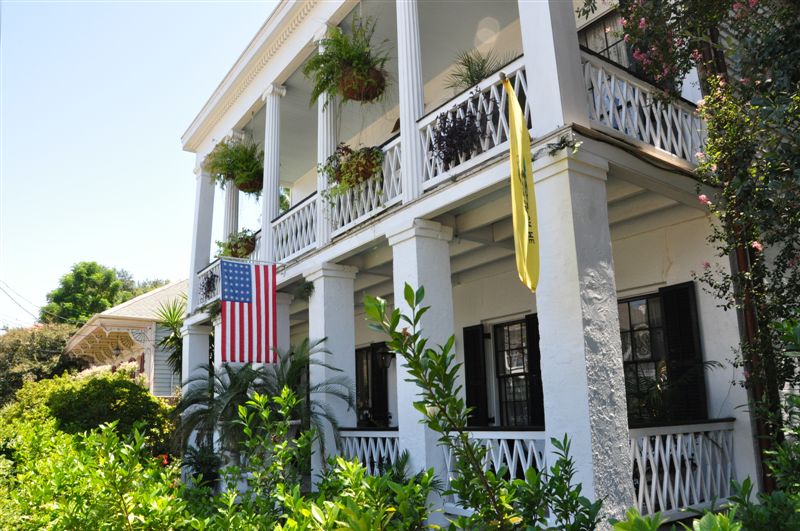 Today we hopped in the car and started driving with no destination in mind. Heading toward downtown New Orleans, we made a split second decision to cross the Crescent City Connection when the bridge appeared in the distance. The first exit on the Westbank may not stand out as a tourist destination, but veer off General DeGaulle, follow the road past Federal City to the river and you arrive at Algiers Point.

Touted as the second oldest neighborhood in New Orleans, Algiers Point sits directly across the Mississippi River from the French Quarter. Originally the site of a slaughterhouse used by French settlers in the 1700s, today the area, with its tree-lined streets leading past homes and stores as old as the 1840s, reminded us of a smaller version of Uptown New Orleans.

We dropped in Tout de Suite Cafe for a quick iced coffee, but their appetizing muffins and croissants convinced us to stay for a second breakfast. While we ate, three-year-old Charles entertained other patrons by dancing a little jig to the live guitar music. When he decided the show was over, he darted out the door with us tailing behind.

A few blocks down Verret Street, and we hit the jackpot with a small playground. Confetti Park, with its whimsical fence and mosaic walkway, is complete with slides, swings and ride-on toys. Here, Baby August bounced around on a bug car, while Charles blackened his fingernails by filling a dump truck with dirt.

Strapping them in their strollers, we walked past colorful plantations, shotguns and creole cottages. We had stopped to comment on the architecture when we heard a child’s squeal of delight. On the tree next to us was the empty shell of a cicada, which is now crouched on my coffee table staring at me with its sightless round eyes. A bug catcher on our bookshelf houses a dozen of his friends, the fruits of our walk turned scavenger hunt.

As we wove up and down streets looking for the critters, we caught the attention of one gentleman who, noticing our random path through town, asked if we were visiting and offered us a brochure. In this community where everyone knows each other, a family of new faces stood out immediately. We chatted a while and found out his house on Olivier Street was once a former Masonic Temple later used as a dance hall where early Jazz musician Buddy Bolden played.

Our walk ended by a focal point of the neighborhood–Holy Name of Mary Church, an imposing Gothic church with 75 stained glass windows crafted in Germany. We drove out of town along the river, viewing New Orleans’ skyline from across the water. As we headed back to the bridge, a line of people waited to board the free passenger ferry ($1 roundtrip for vehicles), which would carry them from “The Point” to the foot of Canal Street.