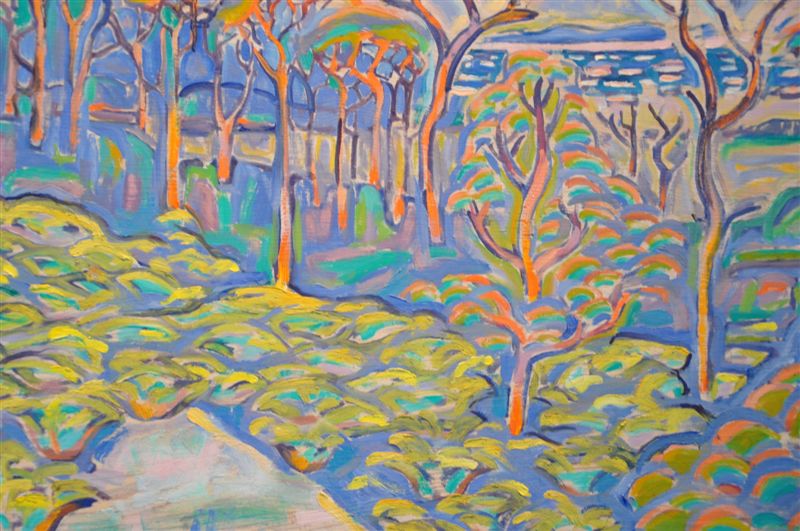 One of several Walter Anderson paintings on display at the OgdenThe air conditioning is running nonstop these days. I find as I get older, I have less tolerance for the heat, while the kiddos seem to be oblivious to it. In a desperate effort to keep them inside, I was allowing them to empty my tupperware drawer into a chaotic pile across my kitchen floor. By the time they were pretending to “swim” in it, I felt an urge to visit someone else’s indoor playground. The museums in New Orleans’ warehouse district were beckoning us, and we answered the call.

We wheeled the strollers into the National World War II Museum first. While I wouldn’t consider the museum’s solemn hallways as suitable for two small children, the airplane-filled lobby is eye candy to them. It’s free to step inside and stroll around the planes, tanks and Higgins boat displayed in the Louisiana Memorial Pavilion. For those without small kids – and with several hours to spare – it’s worth the admission to take a complete tour of the museum, including the 4-D movie, Beyond All Boundaries, showing in the Solomon Victory Theater.

Across the street, the Ogden Museum of Southern Art’s modern building is home to a wide variety of paintings, sculptures, photographs and everything in between – all created by Southern artists. Charles particularly loves coming here on Thursday evenings, when he can dance to live music and try his hand at his own art project. It was much quieter during our visit today, however, and we took our time wandering through the galleries. A must-see is the colorful watercolors, oil paintings and drawings of two Gulf Coast artists, John Alexander and Walter Anderson, on exhibit now. Our visits here always end with a stop on the roof, where you can see expansive views of the city.

For lunch, we crossed back to the World War II Museum’s American Sector restaurant, where Chef John Besh whips up tongue sandwiches alongside hearty American dishes. Kid’s meals are served in old school lunch boxes, complete with a toy surprise.

Upon leaving, we debated whether to head to one of the other museums in walking distance. The Confederate Museum and the Contemporary Arts Center are both fascinating in their own way, while the kids would have been thrilled to go to the Louisiana Children’s Museum. But a meltdown from one kid and a yawn from the other made our decision to save those for next time.