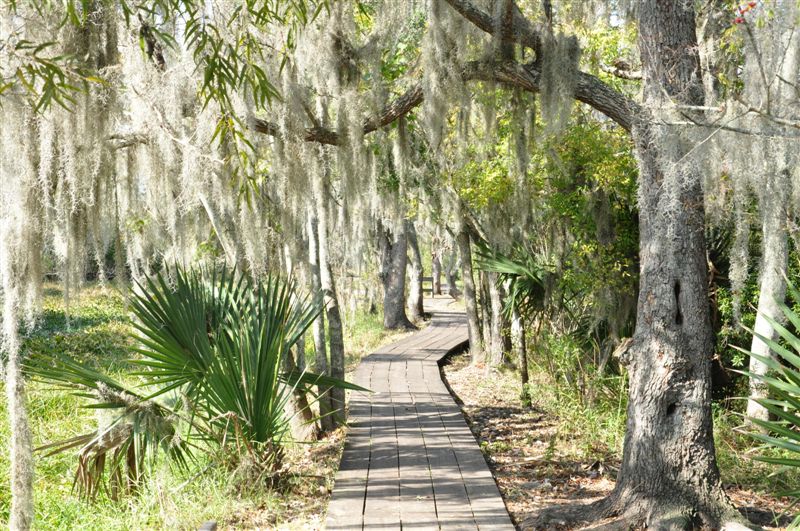 Our latest trip took us back to one of our earliest adventure locations – Jean Lafitte National Park. It was Barataria Buccaneers’ Day at the Barataria Preserve in Marrero, and Charles was on a mission to become a Junior Ranger/Privateer.

We came prepared this time, carrying a dinosaur lunchbox of sandwiches and snacks, and chose the Visitor’s Center as our hiking launch site. One-year-old August was snoring in his stroller before we reached the glass doors leading to the information center. I sat outside with him while Paul chased our three-year-old on a 90-second tour of the wildlife display. When they emerged, Charles proudly announced he had touched every animal in the building before darting off down the trail.

We walked at a brisk pace, following close behind those short legs running at top speed. He had reserves of energy, and the Palmetto Trail’s flat boardwalks through lush greenery were the perfect place to wear him down. I saw several lizards flee his approach, and the only thing that stopped him in his tracks was a noise in the underbrush beside us. While we searched for a snake, I coaxed him into his stroller with the promise of graham crackers.

The Palmetto Trail ends at the parking lot for the Bayou Coquille Trail, and it was here that the park service had set up a kids’ tent complete with coloring pages, a scavenger hunt and pirate eye patches. Now down to one good eye, Charles concentrated hard on coloring the National Park Service badge his favorite color blue to earn his Junior Ranger badge.

Meanwhile, we continued our walk, amazed at the lack of water in the area. The normally high-water Bayou Coquille and Lower Kenta Canal were both choked over with plants, giving the appearance of land where water once stood. We had even lost hope in seeing an alligator until we reached the Pipeline Canal, where a high bridge offered a bird’s eye view of full-grown female gator.

At the trail’s end, a ranger sat at the boat launch offering free canoe rides. Paul and Charles suited up in their life jackets and paddled away in the canoe, while August giggled wildly and threw himself into the remaining life jackets. After the excitement was over, we found a quiet spot to sit and have our picnic lunch before heading back the way we had come.

Our one stop on the return trip was to hand in Charles’ coloring page, where the ranger made him raise his right hand (well, he thought it was his right!) and swore him in as a Junior Ranger. He proudly wore his badge, which gave him permission to boss around mommy and daddy all throughout the last leg of our four-mile hike.