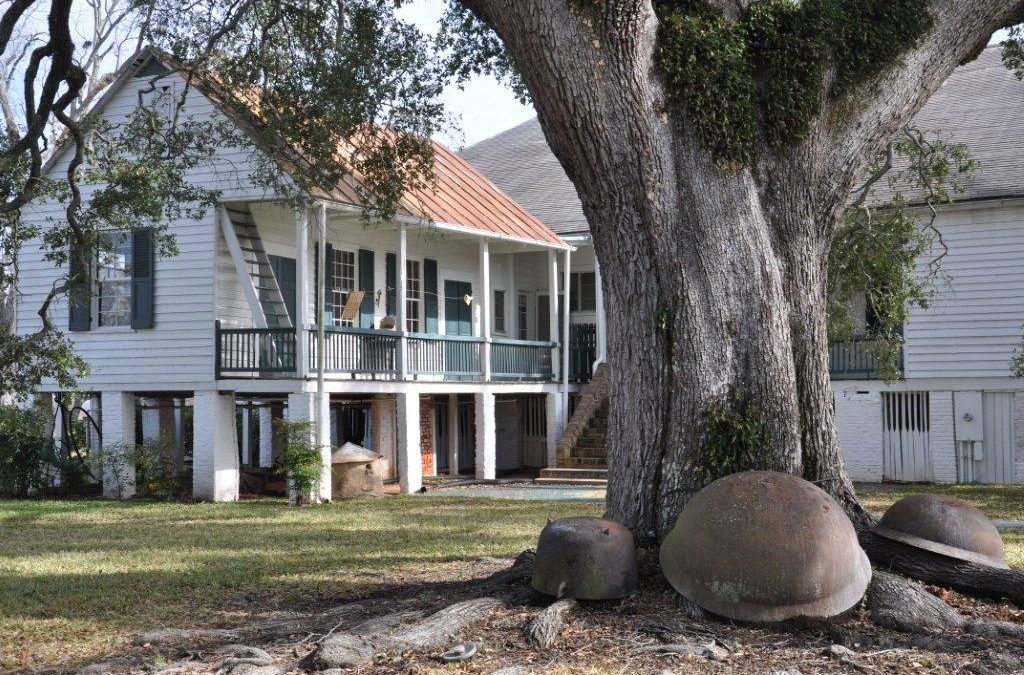 From downtown Natchitoches, we took the winding Highway 494 out the east side of town into the rural countryside. Approximately 116,000 acres surrounding Natchitoches make up the Cane River National Heritage Area, which includes several state historic sites, national historic landmarks and the Cane River Creole National Historical Park. The latter is where we were headed, in search of learning more about the Creoles who once thrived in this area.

We had an ambitious day planned, stopping by both plantations included in the National Historical Park, Melrose Plantation in between and then Kisatchie National Forest on the back end of the trip. The route led us first to Oakland Plantation, where we rushed from the parking lot to the nearby pavilion, trying our best to escape the frigid morning air. We picked up a self-guided walking tour and followed the well-defined path toward the tractor shed and mule barn. Not only is the National Park property free to visit, but the scattered out buildings are all open wide for easy touring. We poked our heads inside one building after another, admiring the construction and discussing the old tools and remnants of the past.

The path steered us toward the old store and post office, which today serves as the Visitor’s Center. Inside, the drafty store held many of the same items available for purchase from when the site was a working plantation. As we poked around, a ranger appeared offering a tour of the main house. Luckily, we were the only ones present at the time, so she adjusted the tour to accommodate the attention spans of a four and two year old. After swearing the kids in as honorary rangers, she showed us the rare and highly guarded bottle garden, where old glass bottles lined the plant beds. We then entered the house, viewing an interesting mix of antique furnishings and modern conveniences such as a TV and “new” kitchen. The ranger told us about the owners, African Americans and Cane River Creoles who once lived and worked here before their property became a testament to the past.

From Oakland, the road followed the river to Melrose Plantation, significant for the artist colony it once held and the cook turned self-taught artist known as Clementine Hunter. We paid to tour the grounds, and started on the far side of the main house by an abandoned cellar. The kids were overjoyed to find the remains of an armadillo inside, and four-year-old Charles busied himself snapping hundreds of photos with my husband’s iphone. Caught up in his excitement, he dropped the phone inside the doorless building, and Paul was forced to jump through an open window into the pit below to retrieve his phone.

Adventure now over, we were able to hustle the kids around to the property’s other historic buildings, such as the Yucca House built between 1796 and 1814 and the highly unusual Africa House and its upstairs Clementine Hunter murals. Hunter’s own small cottage was nearby, another favorite of the children for the lizard that had taken refuge from the cold on her porch.

By now needing lunch, we didn’t stay long at Melrose but were glad we stopped to view this important piece of Louisiana history. The Cane River trail stays true to its past, depicting rural life in the Natchitoches area. Unfortunately for us, this also meant no restaurants in sight. So we scrounged around for the last of our snacks and carried on to Magnolia Plantation, the second of the two National Park properties.

The main house at Magnolia is still privately owned, but the store, a collection of slave houses and a gin barn are all open to the public. Stopping to briefly chat with the ranger inside the Visitor’s Center, he encouraged us to walk the lands and take a look inside the gin at the only wooden screw-type cotton press remaining in its original site. A stack of paper bags lay next to a sign encouraging visitors to gather pecans, so we gave each of the kids their assignment and let them loose. While they competed to see who could find more pecans, we walked around the eight brick slave cabins and viewed the exhibit inside the farthest one. A modified Catholic miraculous medal and several bottles were displayed, evidence of hoodoo rituals and a reminder to me of the Travel Channel’s “Ghost Adventures” show shot here.

The ranger had directed us toward a gas station selling sandwiches, where we stopped to refuel both ourselves and the car before crossing I-49 to the Kisatchie Ranger District of Kisatchie National Forest. Home to the 17-mile Longleaf Scenic Byway, the Kisatchie District is touted as one of the most beautiful locations in the state, featuring a landscape of buttes and mesas rarely seen in Louisiana. Shortly into the drive, we stopped at the Longleaf Vista Recreation Area to stretch our legs on the mile and a half interpretive trail.

We were rewarded with a tranquil stream and expansive views of the surrounding wilderness on a surprisingly strenuous hike. Perhaps the difficulty came from carrying kids up and down countless stairs to the flat tops of buttes, but the scenery was well worth the effort. We had even heard rumors that fossils could be found in these hills, but luck was not on our side this time around and we returned only with the pictures and memories from the day’s events.