Chance Encounter with River Road on the Way to Thibodaux 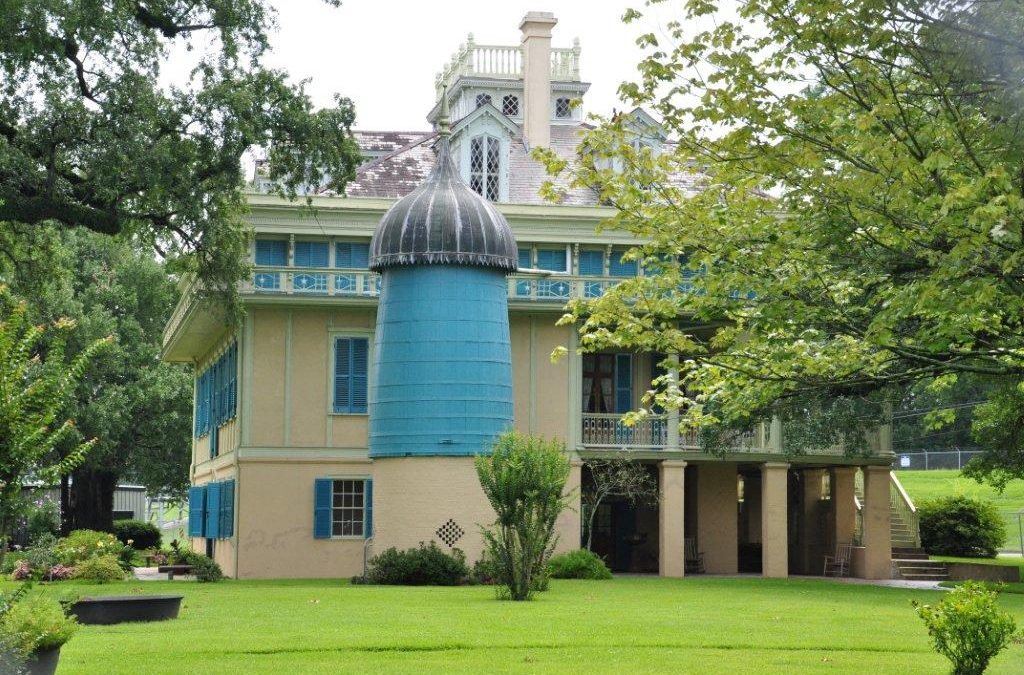 We recently took to the road and set off on a decent hour (give or take) drive to Thibodaux. I came prepared with snacks, drinks and a movie for the allotted time, and the trip would have been perfect except for one small flaw. The Hale Boggs Bridge crossing the Mississippi River was closed. How we missed this crucial piece of information was beyond me, but here we were, stuck with a last minute decision to go downriver to the Huey P. Long Bridge or upriver toward the Veterans Memorial Bridge.

Much to our children’s chagrin, we chose the scenic River Road route upriver to Gramercy. It brought back memories of the road trips we took when we younger, fresh out of college, sans children and with lots of time to wander freely. Unfortunately, children scoff at nostalgia. But we made the most of it and discovered parts of the state we’d never seen before, and as with all memories, I’m sure to only remember the good parts of the trip!

The detour began with a sudden stop at the stunning St. Charles Borromeo Catholic Church. Although not open, the expansive grounds and beautiful church and school begged to be photographed–if only it wasn’t raining. For years, the “Little Red Church” was a welcome sight to steamboat captains traveling the Mississippi River to New Orleans, alerting them to the end of their journey.

Only a bit farther up the road, we encountered the first of several plantations we would see on this trip. Ormond Plantation, built around 1790, is brilliantly restored and open for tours detailing its storied past.

River Road takes a sharp right turn at the Bonnet Carre Spillway, a location made famous by the floodgates opened here whenever the Mississippi River comes dangerously close to topping its levees. I’d seen it on TV and in pictures hundreds of times, but never in person. The photos don’t do justice to the vast complex, and it was a startling sight to see just traveling along the road.

As River Road enters the Spillway, you descend into miles of open fields, giving the impression you’ve been transported to the country roads of Kansas. One man, who was throwing a stick to his dog, looked so out of place I had to check in the rearview mirror to make sure he was really there. It’s gone before you can shake the eerie feeling, and the road continues on as if nothing had changed.

Although only separated by a levee from the Mississippi River, you would never know the swiftly flowing water was right next to you. It’s largely hidden from view, yet strangely connected to the land via large tubes crossing over the road. These link to the countless refineries and factories lining much of River Road, creating a foreign, but oddly interesting, landscape.

I remember traveling River Road at night and seeing the factories ablaze with lights–tiny towns functioning independently from others around them. There was an artist by the name of Charles Sheeler hired to photograph and paint similar factories and show off their inner beauty. Through his eyes, the maze of pipes became exquisite pieces of architecture. If you squint really hard and bury the innate feeling of driving “Cancer Alley,” you begin to see his perspective.

This is what I was contemplating when we came upon San Francisco Plantation, a lavishly ornate and boldly colorful mansion that inspired Francis Parkinson Keyes to write “Steamboat Gothic.” The house and grounds were amazingly pristine, yet out of place sandwiched beside another factory.

We saw other plantations and extremely old homes sitting neglected and slowly melting back into the dirt and trees on the side of the road. There’s no telling how many of these structures have been lost to time, and by the looks of it, many of the ones we recently saw won’t be around for much longer. Some though, like the Godchaux-Reserve House–marked by the locomotive standing on its property–has been taken on by the community in an effort to preserve its structure and importance in history.

So finally arriving in Gramercy, we’re treated to expansive views of the river as we crossed high above its waters. The remainder of our drive south to Thibodaux was fairly uneventful, spent munching on popcorn from the local convenience station while we drove through open fields and torrential rain. As we entered Thibodaux, the flooding stopped as if a faucet had been turned off.

We drove the town, getting the lay of the land and counting the churches along Canal Boulevard. A sign for the Jean Lafitte National Historical Park directed us along Bayou Lafourche to the Wetlands Acadian Cultural Center. The kids sprinted through the exhibit area, showcasing the lives of the Cajuns, but then became engrossed in playing with the dozens of puppets and kid-sized palmetto hut in the kids’ “Gumbo Room.” Outside, a boardwalk overlooked scenic Bayou Lafourche.

Historic downtown Thibodaux is dominated by the Dansereau House Bed and Breakfast, the crown jewel of the city. The one-way streets through the city are lined with boutiques and restaurants, creating a vibrant yet intimate downtown.

We backtracked slightly out of town to eat at Boudreaux’s Restaurant, which came highly recommended by the Jean Lafitte park rangers. It was a good suggestion as we found plenty of tasty food to dine on, and the wait staff were very tolerable of two, umm, “active” children.

The route home took us along picturesque Highway 1, which parallels Bayou Lafourche, past Nicholls State College to Highway 90. We chose the quicker return route as the rain clouds rose high above us, threatening to let loose at any minute.