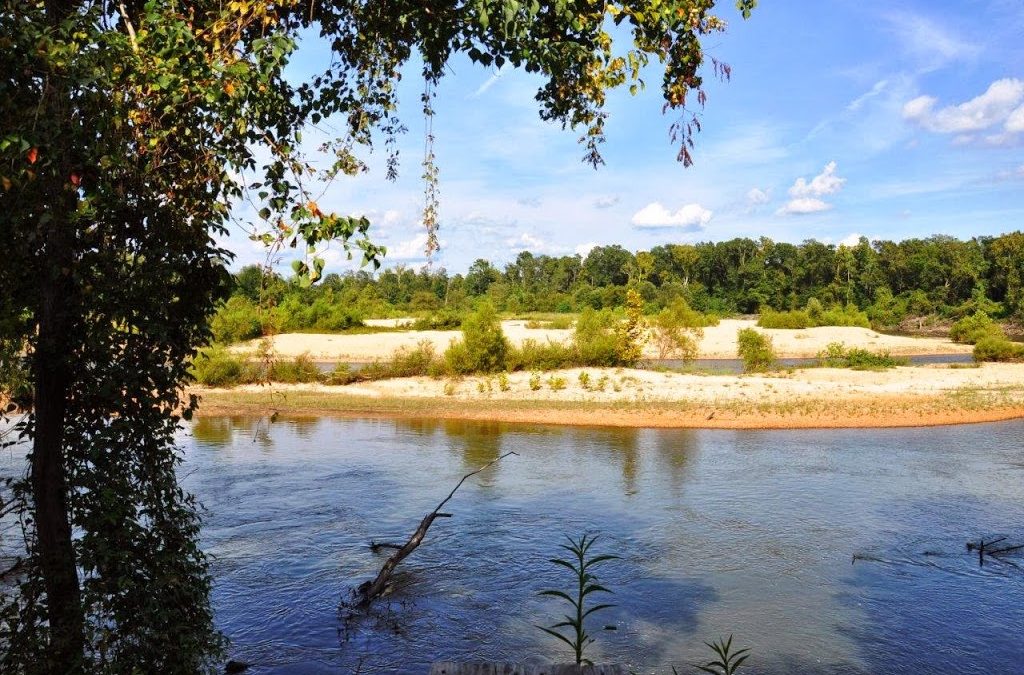 On an unbelievably hot Louisiana summer day, we set out to cool our toes in the waters on the Bogue Chitto River. The state park by the same name is one of Louisiana’s newest state parks, located near Franklinton.

The drive there on LA-25 north takes you past some impressive nurseries. However, once you veer off the main road, the landscape felt foreign to us – as if we were suddenly in another state. It appeared to be land that had been clear cut and then let alone to grow back wild, but all the vegetation was still short enough to give the impression of a wide open space. It’s hard to describe, but I had the same feeling as when we drove through the lava fields in Oregon – a bit disoriented.

But then we reached the entrance to the state park, and everything changed again. We drove inside to find a lush, fragrant pine forest, with bluffs and elevation changes similar to Tunica Hills near St. Francisville. Of course, by the time we reached our destination, it was lunch, so we headed straight for the picnic tables. A covered table lent some relief from the glaring sun, and while we shoved bites of sandwiches in the kids’ mouths, they chased grasshoppers and dragonflies with giddy abandonment.

We vowed to hold out as long as possible before the kids’ drenched themselves in the water, so we started with the hiking trail along the bluff’s ledge. The shaded path was a good 10 degrees cooler than the picnic area and led to stairs that descended deep within the gorge to a lower boardwalk trail. The area down below is known as Fricke’s Cave, although it bears no resemblance to a real cave. It’s unique features led National Geographic to do a story on the area years ago. A collection of Native American arrow heads found in Fricke’s Cave is displayed in the Visitor’s Center.

From here we tried another trail around one of the park’s 11 fishing lakes, where we learned a little about nature from the labeled trees. We also discovered a handful of fossils–tiny imprints of long-ago plants and creatures–in the river rocks scattered about. Not to forget, this was also our first sighting of a velvet ant, which I later learned is not really an ant at all but rather a type of wasp. Who knew?!

By this point, the kids had begged long enough for the water, so we hopped in the car and drove down to the river’s access point. The main parking area was full, so we backtracked to the picnic area and set out from there–following the path through the woods, across the open beach that glared like the Sahara, and finally running full speed into the picturesque river. Several people were milling about on inner tubes, slowly floating downstream while basking–or should I say baking–in the sun. (In case you’re wondering, there is an outfitter in the park that rents the inner tubes.) We stayed long enough for the fish to start nibbling at our toes, and then trecked our way back across the desert for our final destination–the jewel of a water playground.

Not only was there a giant tube slide that dumped the children right into a a long tub of water, but there were streams of water shooting out of the ground and falling out of the sky. While the kids thoroughly drenched themselves, I bought snoballs at the nearby stand as a special treat on our hot summer adventure.