Donaldsonville to Plaquemine on the Mississippi River’s Westbank 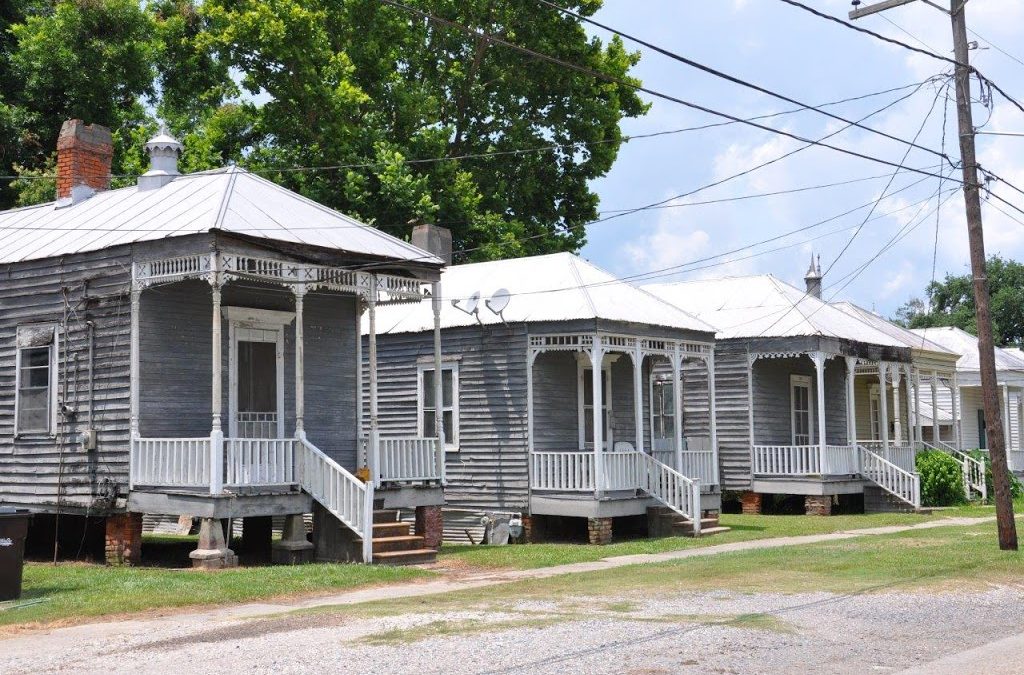 There is no shortage of scenic roads in this state, including many portions of Louisiana Highway 1. The longest road in the state, it runs from Grand Isle to north of Shreveport. We tackled a small portion of it last weekend, driving from Donaldsonville to Port Allen up the westbank of the Mississippi River before crossing over to end at Baton Rouge.

Just a short distance from the Sunshine Bridge, Donaldsonville stands as the parish seat of Ascension Parish and a former capitol of the state of Louisiana (back in 1830). The town’s population and importance in history have fluctuated over the years, as evidenced by the vine-covered ruins of homes just off the main roads of Louisiana’s second largest historic district. Yet, the downtown streets are lined with impressive buildings that testify to this town’s importance and prosperity in the 1800s, long before the industrial plants entered the scene of this agricultural economy.

Many of the buildings are maintained today, such as the red brick courthouse and the one-time department store B. Lemann & Bro. building, both designed by architect James Freret. My particular favorites were the elk-adorned Italianate Elks Lodge and the “For Sale” Bel House, which looked like it was plucked right out of New Orleans’ French Quarter. Donaldsonville also lays claim to primitive artist Alvin Batiste.

From here, we continued north toward Iberville Parish and the town of White Castle, famous for the south’s largest plantation resort – Nottoway Plantation. With 64 rooms and 53,000 square feet within the walls of this massive palace, Nottoway is best seen from River Road, where its white-columned front faces the Mississippi River. Built in 1859, this plantation was a modern marvel for its day, boasting running water in the bathrooms and gas lighting throughout the home’s interior. Today, the plantation has indeed become a resort, with a Grand Pavilion, a Mansion Restaurant, outdoor pool and cabana, and tennis courts. On the day we visited, tents were pitched throughout the property and RV’s lined the outer edges of the parking lot. We hadn’t passed a soul on River Road, yet Nottoway was swarming with people – certainly a hot attraction for the area.

In sharp contrast to Nottoway, the world’s smallest church resides just up the road in Bayou Goula. The tiny, one-room Madonna Chapel is sandwiched between a new house and a field of grazing cattle. We initially passed the site and, after turning around, pulled off the edge of River Road to make our own parking space. The kids bolted in the white picket fence in search of the hidden key to unlock the chapel. It wasn’t really “hidden,” only tucked away inside a box labeled “key,” but seeing as neither of them can read yet, they had quite the scavenger hunt.

The chapel was stifling hot inside, and we left the door open wide as we gazed at the small altar covered in statues of Jesus and Mary and read its touching story. Only eight feet square, the chapel was built in 1903 by a farmer, Anthony Gullo, who promised to build a church to the Madonna if she helped his oldest son recover from a serious illness. An annual mass is held here on August 15 in celebration of the Assumption of the Blessed Mother.

Our next stop was St. Raphael Cemetery, a crumbling grouping of graves and monuments laid out in the bend of the river across the Mississippi from St. Gabriel. Aside from the interesting architecture of the tombs, this is also the final resting spot for Louisiana’s 15th governor, Paul Octave Hebert.

River Road reconnected with Highway 1 in Plaquemine. A summer thunderstorm was rolling in as we pulled up to the Plaquemine Lock State Historic Site, and the skies opened up the moment we entered the lockhouse. The friendly, knowledgeable state park guide welcomed us to the museum and seemed to cater to our every need. Our two-year-old, August, was mesmerized by the working scale model of the lock system, anxiously watching the tiny lock doors open and the boat slowly make its way inside the lock. My husband grabbed a complimentary coffee and headed up the winding staircase for pristine views of the Mississippi River.

As the rain stormed on, the ranger started a funny movie about singing fish to entertain the kids so we were free to browse the exhibits. We discovered the lock was built between 1895 and 1909 to connect the river with Bayou Plaquemine and was designed by Col. Goethals, who later became chief engineer of the Panama Canal. It operated for 52 years until shutting down when a larger lock was built in Port Allen.

When we ventured outside again to view the structure itself, my five-year-old, Charles, spotted an oversized beetle hiding in the doorjamb. Our host then pointed out an even larger beetle (scarily large) that thrilled Charles for the rest of the weekend. He made the bug a home in a coffee cup and carried him all over the property, from our walk up the levee to our stroll across the lock bridge and far below to the lovely waterfront boardwalk. After we (and the bugs) finished our journey, we drove the streets of Plaquemine, gazing at the historic homes and the St. John the Evangelist Catholic Church, “The Cathedral on the Bayou.”