Down in Da Parish 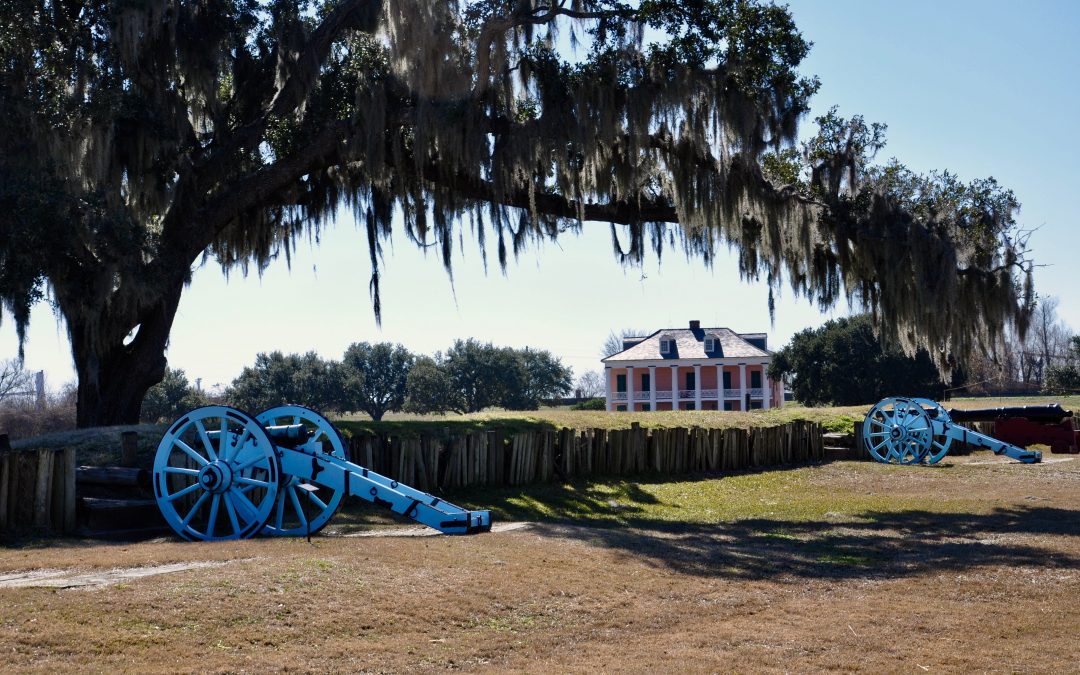 Lured into St. Bernard Parish by a festival, we ended up staying late into the evening to see plantations, a battlefield and chickens. That’s right, chickens kept us out way past nap time. But I digress. It all started when I saw the newspaper article about the Los Islenos Festival. Having skipped it the last two years, I was determined to go. So we called a friend who lived in “The Parish,” as St. Bernardians call their beloved home, and made plans to meet up with her there.

Driving along the back end of the French Quarter, past Bywater and the Lower Ninth Ward, we had a short pit stop to see two plantations that, although within walking distance of each other, are as different as night and day. LeBeau Plantation’s boarded up remains stand eerily proud behind a deep, grass field and a chain link fence. The new roof is in curious contrast to the gaping holes in the wall, but the home lends itself to being photographed. Meanwhile, on the property of the Domino Sugar Plant, the stately Cavaroc mansion appears well-loved in its pristine state. A word to the wise, though, snapping a picture of this beauty will earn you the disdain of the Domino Sugar guards, who descended upon our car, scrawling down our name and license plate number like we were suspected terrorists.

Fleeing the scene of the crime, we continued on to Chalmette Battlefield, which marks the site of the Battle of New Orleans where General Andrew Jackson and his ragtag group of American troops held off the British attack during the final struggle of the War of 1812. Beginning in the newly built visitor’s center, we pressed the button to start the video while I mentally calculated how long I had before having to take off in a chase after Charles. Amazingly, the moving lights of an accompanying diorama kept his attention, and for the first time in years, we were able to see an entire movie. In the end, I broke his attention and dragged him away to look at a large drum so he didn’t see the final results of the war graphically displayed across the screen.

Back outside, he proudly waved his miniature American flag while we led him toward the oddly small Beauregard Plantation, built on the property in 1840. After posing for family pictures in front of our pretend home, we explored the empty rooms inside. The temperature dropped remarkably when we stepped onto the marble floors and felt the cool breeze blowing across the open, facing doors in every room. August lazily watched Charles racing through the house, while I stopped the toddler in his tracks by pointing out a “secret” door to the attic. Little did I know that the door would become the primary topic of discussion for the rest of the day, leading to elaborate stories about a six-armed green monster locked away by the superhero Batman.

The plantation sits on the edge of the Mississippi River levee, and after a quick climb up the steps, we were delighted to catch a glimpse of the Creole Queen paddlewheeler floating by. Another top attraction at the site is the multitudes of crawfish chimneys lining the path to the cannons. Charles was fascinated with peering inside, desperately trying to see the crawfish at the bottom.

Now starving, we made a beeline down the San Bernardo Scenic Byway, passing under an avenue of live oak trees flanking the roadway, to the food booths at the Los Islenos Festival. Advertised as “A celebration of Louisiana’s Spanish Heritage,” the festival paid tribute to the Canary Islanders who settled in the region in the 1700s. Along with Spanish food, music and dancing, we found local craft booths and spacewalks scattered throughout the Los Islenos Historic Village. After refueling on paella and sangria, we explored the museum-quality homes and their endless contribution of “secret doors.”

We enjoyed a few moments of rest while listening to the large group of Spanish singers on stage before packing everyone up and heading home. One last detour was meant to be a quick in and out picture of the Sebastopol Plantation. Being a private residence, we were surprised to see a sign advertising free tours from noon to 4 p.m. Not only is it a rare event to stumble upon free entrance into a plantation, it is even more amazing that at 4:30 p.m., the owner and curator, Alberta Lewis, saw us stop our car and came to offer us a tour past closing time.

Charles, August and I made it almost through the history of the first room before having to go outside and spare the house from damage. While Paul was given a guided presentation of the 180-year-old house, the kids and I met a friend of the owner who engaged Charles in picking up pecans across the expansive yard. He then led us to the chicken coop, where roosters, chickens and two peacocks strutted all around our feet. We left carrying a basket of pecans, half a carton of fresh eggs and a lasting memory of the generosity of two St. Bernardians (one of whom also happened to be the talented artist behind Haydel’s king cake dolls).