End of the Road in Plaquemines 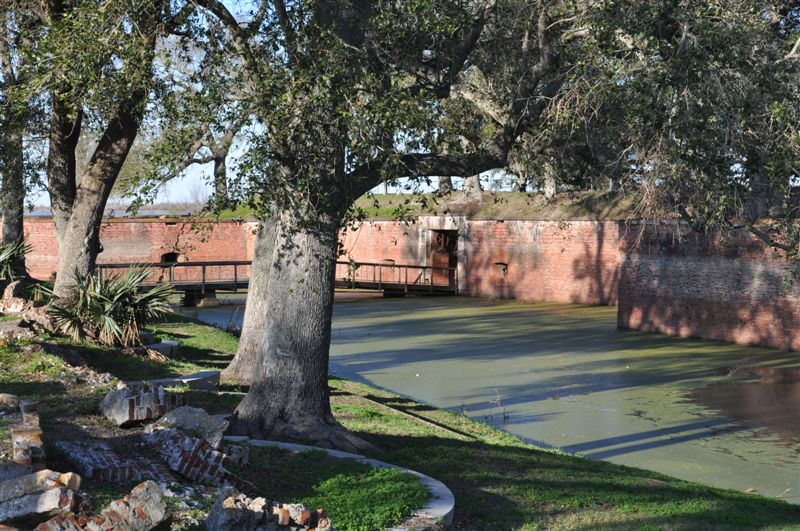 It’s not easy to get lost in Plaquemines Parish. There’s one main road that runs down the left side of the Mississippi River and one down the right. Once you get on it, you simply drive straight ahead until you reach the end. We chose Highway 23 on the left side and spent the day exploring our rural neighbor.

It was late morning before we headed out, jumping on the Crescent City Connection to cross the Mississippi and then exiting nearly immediately at General De Gaulle Dr. The road leads away from the city and high onto a bridge over the Intracoastal Canal, curving back down to drop us in the middle of pasture land. Just a short jaunt from here is Woodlands Conservancy, home to 13 miles of hiking and equestrian trails winding through forests and canals.

Although the 6-mile Bottomland Trail was intriguing with its promise of 10 World War II Ammunition Magazines, we glanced at our 2 and 4-year-old kids and chose the easier 1.1-mile Upland Trail for our own sanity. The recently wet trail, which began by snaking out alongside a canal, was now hardened mud perfectly capturing the footprints of the deer that walked the path before us. Charles, dressed in his entomologist outfit, examined the footprints with his magnifying glass in between chasing the crickets and large mosquitos in hopes of capturing one for his bug catcher.

Soon, the trail veered away from the water and entered the forest, where thousands of yellow flowers blanketed the ground.  Being little gentlemen, they picked flowers for their mommy while dad photographed them foraging in a mass of yellow. Every so often, the trail passed a large swamp maple dropping dark red leaves to the ground or a giant cypress standing watch over the smaller trees surrounding it. It was a pleasant, leisurely walk through nature that looped back to the beginning and ended near a pavilion perfect for a post-hike snack.

The food only made our stomachs grumble more, so back in the car and now on Highway 23, we made our next stop Becnel’s Farmers Market. Here, we re-energized on tamales, boudin and alligator sausage, while the kids enjoyed hot dogs from the small food vendor next door. Before continuing on, we browsed the many citrus trees for sale and admired the Blue Angel plane elevated in the air across the street at the Naval Air Station.

As we drove south, the land around us thinned, leaving an uneasy feeling of vulnerability. Modest homes intermingled with sprawling refineries in this landscape dominated by fishing and oil. In the midst of this rural community lies the lovely, red-roofed Woodland Plantation, famous for its image gracing the label of Southern Comfort bottles since 1934. We parked by the main house and knocked on the front door, which swung open at our touch. Now a bed and breakfast, the plantation is open for browsing and viewing by anyone who chances by, and we explored each of the cozy rooms filled with antique furniture.

Next door, the old St. Patrick’s Church was moved to this location and now served as Spirits Hall, where six-course dinners are served up to anyone making reservations. The hostess told us how most of the guests were fishermen who stayed overnight before going out on one of the fishing charters arranged by the plantation staff. At the end of the day, the chef cleans and cooks their catch and serves it up in a delicious meal.

The property, including the plantation, received nine feet of water from last year’s Hurricane Isaac, yet you never would have known it. In addition to the main house and church turned dining hall, the beautifully landscaped acreage contained a newly renovated overseer’s house, an old slave cabin currently under repair and the ruins of the sugarcane mill. We strolled the property, at ease to make ourselves at home, while the kids giggled and squealed at the affectionate attention of the home’s cats.

We had a difficult time persuading them to leave the cats behind so we could continue down the road to Fort Jackson. Built between 1822 and 1832, the fort played a role in the Civil War and stands in a prominent spot overlooking the Mississippi River. Information is hard to come by online regarding the fort’s status, and although last year’s 150th Civil War Anniversary website states that the sight is open daily, we found the gates locked and signs posted saying no public entrance.

We made the most of our time there, though, and walked around the outer wall of the fort, which at times afforded glimpses into the fort’s interior. A monument on the bank of the river denoted the spot where the first Mardi Gras took place in 1699 and another showed a picture of the explorer LaSalle underneath a cross soaring up into the sky. As we walked, something–“perhaps the loch ness monster,” Charles informed us–seemed to follow us in the moat below, leaping into the air every so often to show its large black head.

As the sun lowered, the air chilled and we hurried to reach our final destination – the end of the road. It wasn’t hard to find the flat Tidewater Road only inches higher than the water lapping at its sides. Cypress trees graced both sides of the road, and countless birds perched in their ghostly limbs, making this a prime spot for birding enthusiasts. We even spotted a flash of hot pink and jumped at finding the elusive roseate spoonbill standing silently in the water.

At the end, the road simply disappeared and a sign welcomed us to the “southernmost point in Louisiana,” where another refinery reminded us of the big business dominating Louisiana’s coast. Yet, as unnatural as it looked in that cypress swamp, its presence didn’t deter the thousands of birds sitting along every pipe and building there.

It was dark as we drove back to the city along the same road and encountered a mass of lights floating above the houses to our right. We were shocked to realize it was a cruise ship making its way south along the Mississippi, a city in itself, seemingly hovering in the air beyond the hard-working residents of this parish.