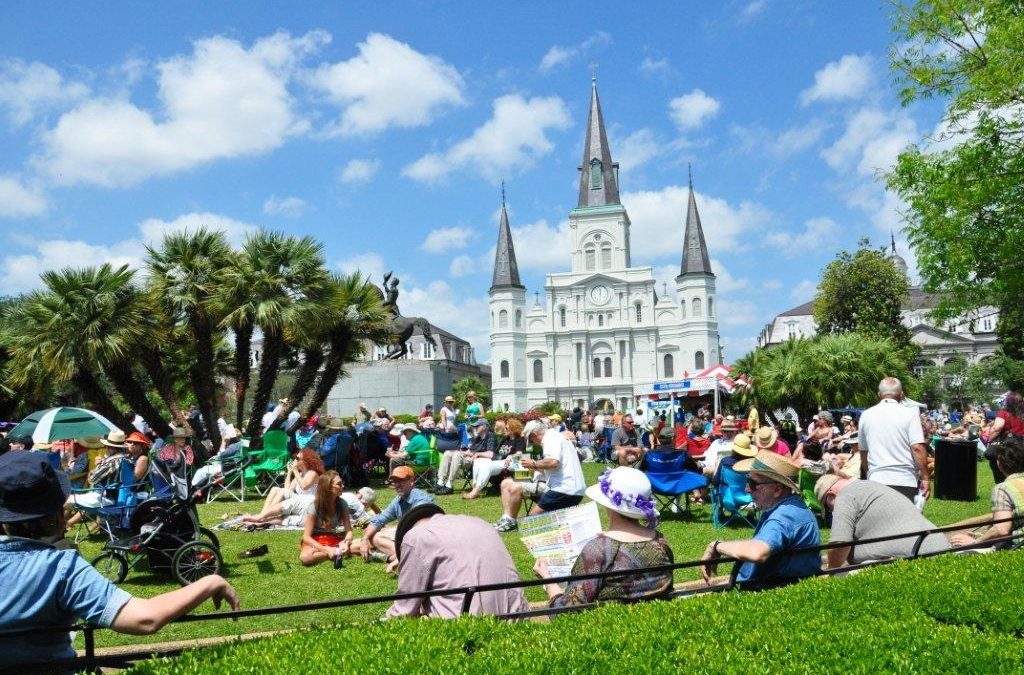 French Quarter Fest, the largest free music festival in the South, is four, packed days of more than 800 local musicians playing on 22 stages throughout the Quarter’s historic streets and waterfront. Now in its 29th year, the event has ballooned into a massive festival rivaling that of the famous Jazz Fest occurring just a few weeks later.

It’s a tricky busy, though, trying to navigate an extremely well-attended festival with two very “energetic” little boys. Gone are the days when we could lounge in a lawn chair under a shade tree in Jackson Square, sipping daiquiris and savoring food from local restaurants while relaxing to a weekend of free music.

This year, we had to be strategic in our festival-going. We arrived early, strolling the nearly empty streets for more than an hour before the music started up and thousands of people seemed to materialize out of nowhere.The horse and carriage tours sauntering along the roads kept the kids’ attention, while we mapped out our route.

Our musical tour began with the classical stage at St. Mary’s Church at the Ursuline Convent, where the first show of the morning was Opera on Tap. We managed to make it through two songs before our oldest decided to try his own rendition of opera singing. Next up was the French Market Traditional Jazz Stage, where the crowd was dancing some fancy footwork to the Palmetto Bug Stompers. The beat was lively and so were the kids, bopping their heads around to the rhythm.

A slow song set our strollers in motion again, and as attention spans lasted through two, maybe three songs at a time, we hopped from stage to stage throughout the day. Luckily, there seemed to be music on nearly every corner, and we didn’t have to walk far to find the next group of toe-tapping musicians and the fans surrounding them.

Our path took us from Dutch Alley to Jackson Square, Preservation Hall to the Hermann-Grima House. We grabbed several dishes of food along the way and mostly ate on the run. Despite the lack of time to “savor” the flavors, we still appreciated the tasty delights served up by some of the city’s best restaurants, and our youngest took a particular liking to some grillades and cheese grits produced by K-Paul’s.

Throughout the day, our senses were captured over and over again, enveloped by the sights, sounds and tastes of an event that can only take place in New Orleans. For one long weekend, the city’s most talented musicians bring to life every steamy street corner, green space and dark, historic building. Meanwhile, the walls and fences are hung with colorful artwork for sale, and the rest of the space is covered in tempting food booths. It’s a chance to discover places you’ve never seen and sounds you’ve never heard, so if you didn’t make it this year, you should mark your calendar for April 2013.