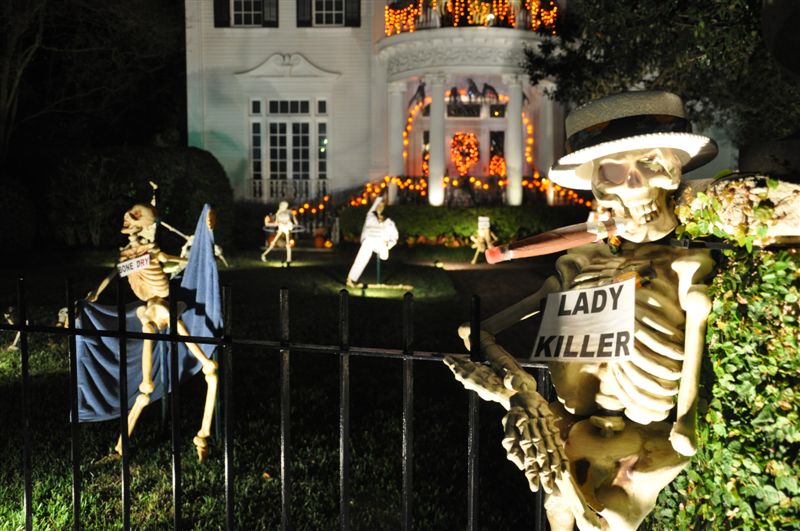 This Halloween weekend, we took advantage of the ghouls and goblins haunting New Orleans. We kicked it off Friday night at Audubon Zoo’s “Boo at the Zoo,” where hundreds of Jedis, princesses and fairytale characters had replaced the usual wild animals found at the zoo. We had left the little one home with his Omi (granny) and brought T-Rex Charlie out for the festivities.

Charles was in his element, stomping around in his miniature dinosaur costume, playing toddler games and trying out his “trick or treat!” yell. Bag overflowing with candy, he begged us to take him on the ghost train, which unfortunately was not recommended for a three year old. Instead, we entered the Dinosaur Adventure, which looked creepily realistic in the dark. Charles was scared just enough to keep him clinging to me, and we both jumped when one of those sneaky reptiles shot a spray of water out of his mouth right at our foreheads.

On Saturday, before attending a Halloween party in the French Quarter, we strolled the historic streets looking for decorations. The French Market had donned a large pumpkin around its entrance and set up a mini maze for children, while several homes greeted visitors with spooky butlers and flying witches. Meanwhile, on St. Charles Avenue, some of the city’s most beautiful mansions had transformed into haunted houses, with skeletons playing across their yards and jack-o-lanterns staring us down with glowing eyes.

By the time Halloween Day arrived, I already had to sew up both tails on the well-worn T-Rex and Triceratops costumes. Paul and I both left work early to prepare the kids for Faubourg St. John’s “Bounty on the Bayou.” Policemen passing out glowing necklaces had blocked the streets surrounding Fortier Park, where children of all ages were munching on free hotdogs and popcorn. Every house in the area was open for trick or treating, and we made a haul in candy–lots and lots of candy that has now somehow found its way into every room in my house. I counted the night a victory when Charles looked up at me under his dinosaur head and said, “Only two more houses, mommy. Then we’re done.”