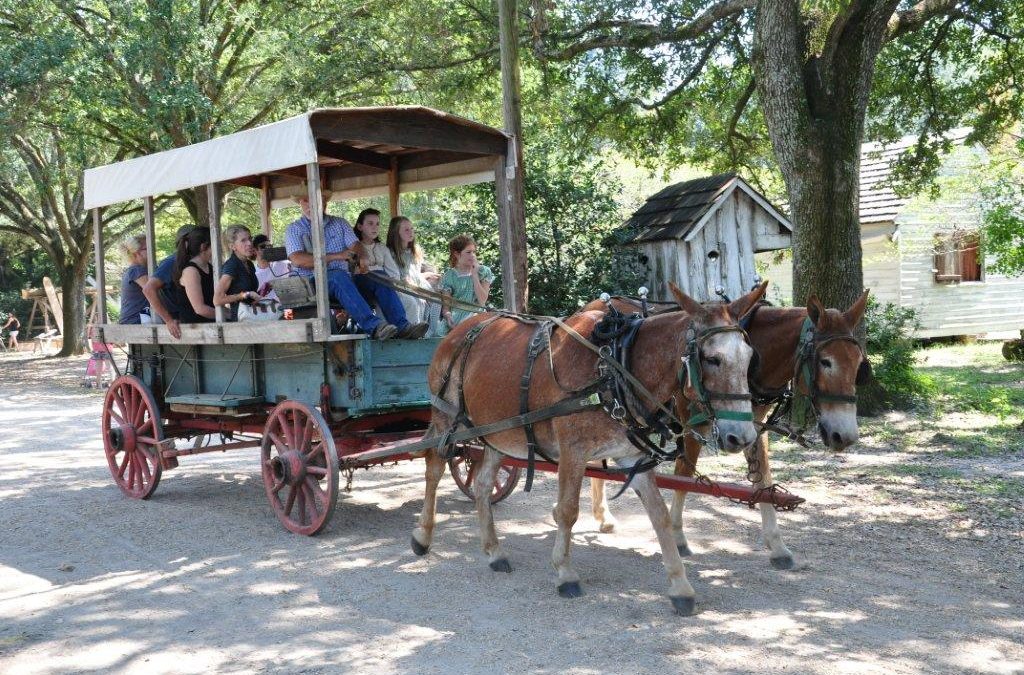 Saturday brought with it the first day of fall, and because you wouldn’t know it by the weather, we decided to celebrate by visiting the Harvest Days festival at Louisiana State University’s Rural Life Museum. For its 16th year running, the outdoor museum showcased a living history of 19th century rural Louisiana, and we spent the day walking through their fascinating lifestyle.

The journey through time began inside the exhibit barn, where you can find anything and everything from antique farm equipment to an old hearse to a baby walker. The normally quiet, static museum was a bustle of activity, with visitors mingling with docents, a woman carrying her pet duck puppet and wood carvers whittling away at small figures. We stopped to visit with one woman rhythmically pedaling a spinning wheel, turning balls of wool into a long, fine thread. She explained how wool is easier to spin than cotton, which requires a faster turn of the wheel because it is a slicker material.

As you exited the back door, the village emerged, with sleeping tents set up throughout the property and small cooking fires smoldering in the day’s heat. Two mules pulled up in front of us, tugging behind them a buggy full of passengers, and 2-year-old August launched into a series of neighs. Our normally fearless children were actually timid around the animals, so we passed up the buggy tour and opted to walk instead.

“Homeowners” led us on guided tours through their 200-year-old houses, proudly pointing out the furniture and architecture of each. We watched the blacksmith stoke his fire until it was nice and hot, and the kids took turns pulling the rope on the steam engine to make the whistle blow. A harvest spread dominated the kitchen, where we encountered the delicious smells of pumpkins stuffed with baked apples and fried sweet potatoes.

The boom of a cannon was a constant background noise, reminding us that a Civil War reenactment was taking place across the field. We headed in the opposite direction, though, away from the “scary” noise and over toward the corn maze. Along the way, we stopped to smell some cane syrup being boiled and took a turn at grinding corn off the stalk.

An opening in the back fence led to the labyrinth of corn, where our 4-year-old pointed the way ahead. I have to admit, we finally cheated and charged right through the corn to get to the other side. Our reward was a handful of water balloons meant to be launched at wooden targets, but instead popped on top of the kids’ heads. Soaked through, they were delighted by the afternoon of fun and begged to return again.