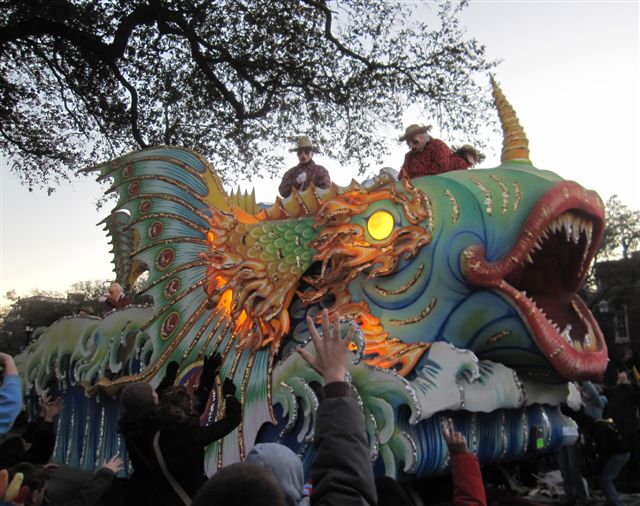 There are some things in life that children have to learn at an early age. Take football, for example. I’m determined to have my toddler, Charles, recite the LSU Fight Song before he can fully sing the alphabet. Likewise, you are never too young to learn to appreciate Mardi Gras. There is one more day left in this year’s Mardi Gras season, and August has already been to 14 parades. That’s pretty hard core for a 7-month-old.

Now there are always days, like Saturday, when you wonder if it’s worth it. We were watching Iris on Napoleon when the first drops of rain warned us it was time to leave. With no umbrella and having walked more than a mile to the parade, we didn’t have time to make it back to the house. So we holed up in a nearby coffee shop, where we sat for nearly two hours while watching a river flow down what used to be Dryades Street. Mind you, this was two hours trapped in one small room with two small children and a stroller overflowing with beads, toys and stuffed animals. All I can say is we all went to bed early that night, some of us by choice and others by force. But then the next morning, you wake up refreshed and set off again to enjoy the last few days before Lent.

I’ve learned that age plays a large part in enjoyment level. The super krewes of Bacchus, Endymion and Orpheus, with their celebrity riders and elaborate floats, draw the huge crowds. At one time, my husband and I were annual regulars at these three parades. Then, enter two small children. Priorities change and so do our parade plans.

Take Charles, for starters. Three weeks shy of turning three, his latest obsession (along with Batman and Spiderman) is trombones. Sure, the throws are nice, and a nervous breakdown is almost always in the forecast when he doesn’t catch a football, but mostly he’s there to get up close and personal with the bands. He wants to be on the front row and have plenty of room to dance and march at his leisure, which equals no love affair with large crowds.

Now, August, on the other hand, wants nothing to do with loud noises. You can imagine our dilemma with that one. After the first parade, though, I discovered that all he really wants is to be held close — cocoon-like — so he can drift off to sleep. With this revelation, I packed him tightly into his Moby Wrap, and for the next 13 parades, he had the best sleep in ages.

Armed with our new knowledge and lots of trials and errors, we finally developed some pretty sound advice for other families venturing out into carnival: 1) Start at the beginning of the route. If a parade begins on Magazine and Jefferson at 5 p.m., don’t try and catch it on Napoleon or St. Charles — and certainly not on Canal. Go to Magazine. On any given day, the crowds range from light to manageable, and you rarely have to fight a ladder for a good viewing spot. 2) Bring lots of snacks and drinks. You might think you’ll only be there an hour, but the reality is going to be much longer. 3) If you can, walk from your house. In the long run, it’ll be quicker and easier. If you must drive, go late and check out the close spots first before parking a mile away. We’ve been lucky on several occasions, garnering a choice spot just a block from the route minutes before the parade started. 4) Be mentally prepared to leave when necessary. While Mardi Gras is all about having fun, it often also means no naps, long hours of over-stimulation, countless sugar highs from all that king cake and daily meltdowns over a lost blinking dragon or broken sword. 5) And, lastly, bring an umbrella. You never know when you’re going to need it.