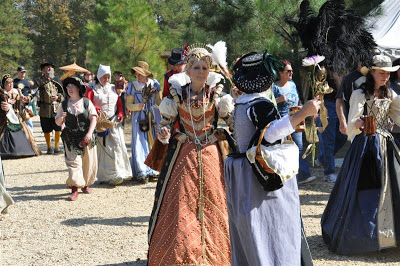 Every November on the outskirts of Hammond, men, women and children dust off their swords and corsets and step back in time to the village of Albright. They become the centerpiece of the Louisiana Renaissance Festival, affectionately known as Ren Fest, and they open their doors wide to the public.

Our family of four accepted the invitation and set off for our hour-long drive from New Orleans. The adventure began the second we emerged from the car. A horse-drawn wagon pulled up at our feet and offered us a ride to the front entrance. Charles was on board with lightning speed and waited with as much patience as a three-year-old can muster while others climbed inside.

Our chauffeur dropped us at the castle gates, and the dust stirred beneath us as we made our way along the dirt road. The village has grown over its 12 years, and many permanent houses and shops now create a surprisingly real town settled around a tranquil lake. I glanced in a costume rental shop, where tourists were trading their street clothes for period clothing. While costumes and fake accents are optional in Albright, many of the visitors seem to embrace the role playing.

The kids were fascinated by the entire place. I’ve never seen them both so quiet and wide-eyed in their whole lives. We strolled a quarter of the path around the lake, browsing through candle-making, jewelry and toy shops before stopping to watch a sword-fighting, comedy show. Paul and I cracked up at the slightly bawdy comedians who enjoyed heckling each other and the audience. Meanwhile, Charles was captivated by the clanging of their steel swords, while August collected pine cones on the ground next to us.

Next up, we forewent the giant turkey legs in favor of Mediterranean food and made a picnic under some pine trees by the lake. We caught a portion of a belly dancing show during lunch before trying out some hoola-hoops and juggling stix.

The more we walked, the more we saw–from dungeons to jousting, living history demonstrations to a magic show. Charles suckered us into buying him a wooden pirate sword–with a blue handle, of course–and he has been torturing his little brother with it ever since. He also developed a slight crush on Queen Elizabeth I and was shaking with anticipation when he found out she was going to “knight” him. After she touched his shoulders and top of his head with her sword and then belted a loud “hip hip huzzah,” he left with the full belief that he was now King.

Our journey back in time ended on that note, and we eased ourselves back into reality by stopping for coffee in downtown Hammond. By the time we hit the interstate, both kids had passed out in the back seat and amazingly were out for the night.