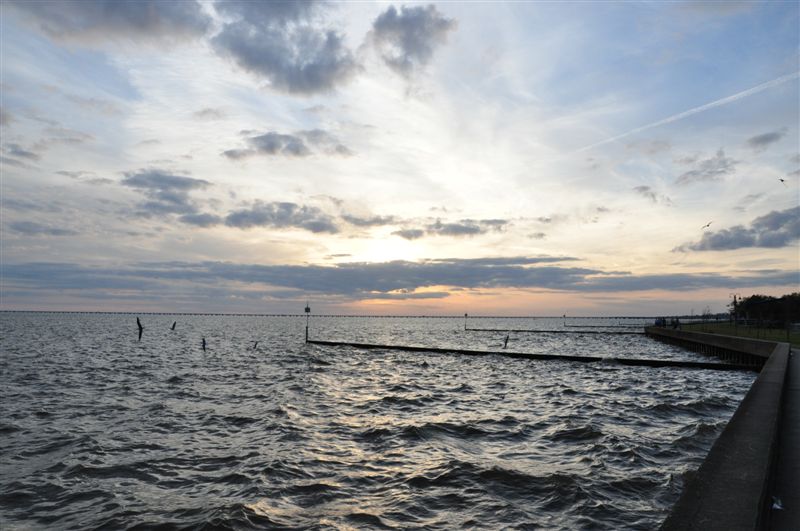 Every Monday morning, thousands of people wake up at the crack of dawn to leave their homes and drive across the longest bridge in the world to their jobs in the city. A lover of sleep and a hater of traffic, I’ve always wondered what could possess someone to willingly choose that daily commute across Lake Pontchartrain. But as one coworker described it, there’s a certain point on the drive home when the New Orleans’ skyline fades away and so does all the stress that comes with it. St. Tammany Parish, also known as the Northshore, is home to quaint towns that pride themselves on not being a suburb of New Orleans. This weekend, we decided to see what it is about the Northshore that lures people across that 24-mile-long Causeway Bridge.

Getting a late start, we were already hungry for lunch before we reached the Interstate. So we rerouted our original plans, bypassing Mandeville and Covington and heading straight for Abita Springs and the Abita Brew Pub. Once the home to the actual brewery, now the restaurant serves up oversized portions of salads, hamburgers and other entrees along with a wide selection of Abita beer. Eating establishments are always touchy with two small kids, but the free crayons and coloring sheet went a long way toward keeping Charles in check until his shrimp and french fries arrived. Of course, he scarfed them down in 2.4 seconds and then bolted out of his chair in search of mischief. Luckily, I have learned to eat equally fast and was able to guide him out the door while my husband, Paul, paid.

Abita Springs is tiny as far as towns go. It’s one of those places where if you blink while driving too fast, you’ll miss the downtown. You’ll be sorry if you do, though. Walking out the front door of the Brew Pub, we found ourselves standing on the Tammany Trace, a railroad track turned into a bike/jog/horseback ride path that runs across St. Tammany Parish. The Trace plunges you deep into nature and then opens up at each town or city it passes. Dodging the bicyclists, we crossed the trail and headed toward the large gazebo built in 1884 for the New Orleans World’s Fair. It was reconstructed over — what else — but the famous spring that once lured tourists with its clean waters. Today, a statue of an Indian princess kneels over the bubbling water.

As we walked toward the town museum, Charles spotted a man carrying an instrument and ran off to investigate. Within minutes, several more musicians arrived and started up their weekly concert. We admired the music until the museum guide revealed to Charles the secret for starting up the water park and then gave him a cup to collect water from the lion’s head fountain. He was so fascinated by drinking the water pouring out of the lion’s mouth that he never even noticed the playground looming large behind us.

Anxious to continue our journey, Paul steered us toward the car and the Nature Conservancy’s Abita Creek Flatwoods Preserve where a boardwalk runs through a long-leaf pine savanna and swamp. Unfortunately, the carnivorous yellow pitcher plants were not in season, but it was still a pleasant walk on a perfect, 70-degree day.

Back on the road, we headed south on 59 and stopped off at Tammany Trace Headquarters and the Kids Konnection playground. While I fed August his unappetizing jar of turkey and vegetable dinner, Paul and Charles went off to play in the sand pit. At the visitor center half a mile down the road, we picked up glossy brochures highlighting all the places we missed before continuing on to scenic Mandeville. A drive along the shores of Lake Pontchartrain tempted us to stop the car and take a stroll. Behind us, couples enjoyed romantic dinners in restaurants overlooking the sun setting on the massive lake.

There was only time for one last stop before making our way back across the bridge, and Paul led us deep into a neighborhood to find the  Seven Sisters, the oldest live oak tree in Louisiana. He couldn’t hide his enthusiasm at finding the gem and had to sneak up the driveway of the private property to take this picture.

While the kids were lulled to sleep by the monotonous bumps of the bridge, I pulled out the brochures and made a quick wish list for the future. We had only touched the stem of St. Tammany Parish and had much to go back and see. So what’s on the list for next time? Well, for starters, there’s Fountainebleau State Park, Camp Salmen, the Global Wildlife Center, Saint Joseph Abbey, and on and on and on…