Life in the Swamp 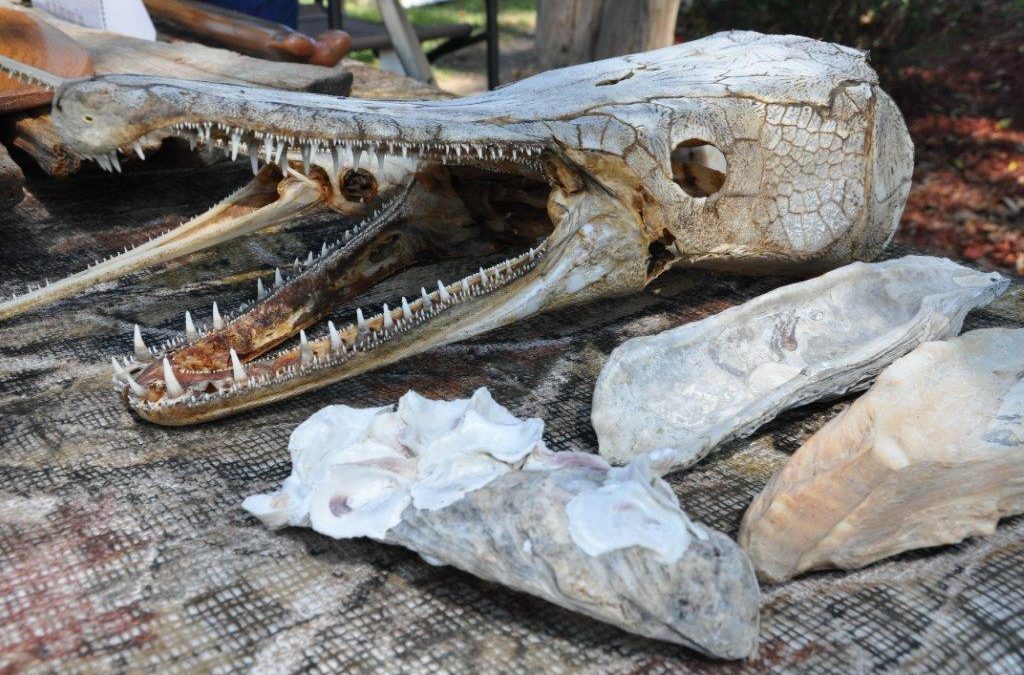 More times than I can count, we’ve driven the I-10 between Baton Rouge and Lafayette as a straight-shot, watching the Atchafalaya swamps through our windshield tour. This weekend, though, we ventured off the Grosse Tete exit for what I thought was a small swamp exhibit at the Visitor’s Center. Instead, we discovered an amazing gem of a festival, with more free food and live music than we could ever imagine.

We knew something was up when every road in the small town was lined with parked cars. The sounds of Cajun music filled the air as we walked the short distance from our car to the Iberville Swamp Life Expo. Shaded by live oaks and set alongside the peaceful Bayou Grosse Tete, the bustling event was in sharp contrast to the tranquil scenery.

A path of booths circled the property, and we began by browsing the largely functional art on display. Talented John James Clark’s rare display of hand-carved cypress boats looked too pristine for actual use, and artist Charlene Hebert’s oil paintings depicted life in the Atchafalaya. Naturally, the kids were drawn to animal skins and turtle shells on display, and my youngest even set up residence in an exhibitor’s folding chair – determined to just sit and people watch.

And then came the food. We started off slow, with a piece of bread dipped in the wild flavor of homemade cane syrup. As we rounded the corner, I discovered the Cajun-made Bread Pudding and couldn’t resist its perfect consistency. I kept telling myself, “Life is short, so eat dessert first.” The next half hour was a whirlwind of Crawfish Etouffee d’Atchafalaya, Big Cajun Wild Duck and Andouille Gumbo, Big Pete’s Cajun Cracklins and Bayou Land Mustard Greens and Pig Tails.

We were all walking a bit slower when my four-year-old, Charles, spotted a whole alligator being carved up before our eyes. The still-warm meat melted in our mouths, and Charles was thrilled to shovel it in while boasting to anyone who would listen that he was a “carnivore.” The cooks must have been won over by him because they sent us home with a pair of alligator feet (skin still on), which my husband strategically “forgot” in a friend’s freezer.

After watching the crowd dance to the music for a bit, we continued on our journey, heading north toward Rosedale and Maringouin on a driving tour of historic homes. The Parish website offers a downloadable map marking the locations of several privately owned, but still exquisite plantations. We made the loop up 76 and down 77, passing fields of sugar cane and green pastures all lying on the outskirts of the Atchafalaya Basin levee.

It was a nice reprieve before jumping back on the interstate and soaring past this area’s untamed wilderness. Although we researched hikes in the Atchafalaya, particularly in the Sherburne Wildlife Management Area, the notice of hunting season made us shy away, and the kids were still too small for a canoe trip. Determined though to introduce them to the region, we opted for the next best choice, stopping at the University of Louisiana at Lafayette’s cypress swamp.

Hidden behind a campus of buildings, the surprisingly large swamp presented more than we bargained for. Initially thrilled to spot a baby alligator among the abundant frogs and turtles, we became slightly nervous as a line of much larger alligators started following our movements around the lake. By the time we circled the entire area, we had seen more than a half dozen of the powerful animals. At one point, a student studying dropped his paper in the water, and I cringed as he reached over and lifted it out, half expecting a gator to get there first.

It was quite the experience, and of course, the kids were beyond excited by our day’s adventures. We finished strong with boudin grilled cheese sandwiches from Johnson’s Boucaniere in downtown Lafayette, before announcing that our diets started Monday.