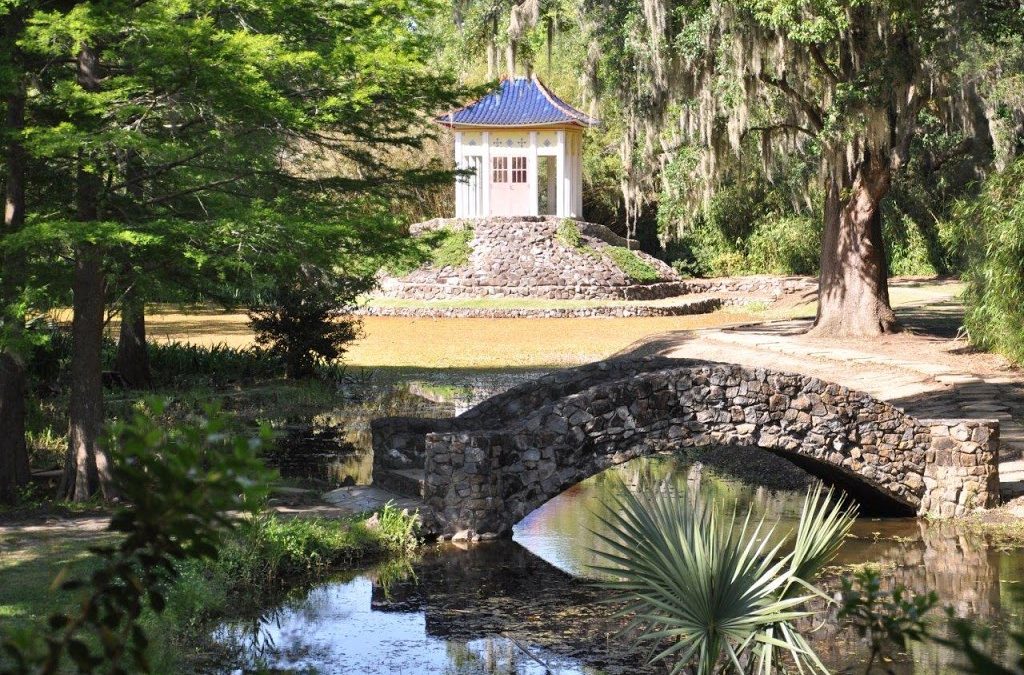 On one of the last cool weekends before summer, we jumped in the car to visit Avery Island, home to Tabasco as well as the beautiful oasis, Jungle Gardens. On previous trips, we always took I-10 from New Orleans to Breaux Bridge and then headed south. This time, however, we made our way along the southern route, traveling Highway 90 through Morgan City, Patterson and Franklin before reaching our destination.

The drive brought us through scenic vistas of classic Louisiana swamps. While the kids watched “Ice Age” in the back of the car, we immersed ourselves in the abundant cypress trees basking in the dark waters prolific in this part of the state. Our first destination was Morgan City, sporting a slogan “Right in the Middle of Everywhere” and famous for its annual Shrimp and Petroleum Festival (the name says it all). On a map, Morgan City makes up half of an island surrounded by countless lakes, rivers, bayous and various other bodies of water twisting and turning around the floating land.

We headed straight for the historic downtown toward Front Street and the towering floodwall protecting the city from the Atchafalaya River. The road led us to an opening in the floodwall, and we parked at the edge of the river beside a handful of people fishing. The kids were elated to finally stretch their legs and set off at a sprint along the dock. We raced behind, taking in the muddy river and the boats tied up at its side. Before long, we ascended the stairs to the floodwall and looked down at the city below. Traffic was light on this Saturday morning, yet shops appeared to be opening in the historic buildings.

The floodwall gave us a great view of the river, and the three bridges spanning across it–one for trains and the other two for cars. One of them, the Long-Allen Bridge, boasted a pier resting on one of the deepest foundations in the world (176 feet below low water stage) when it was built in 1933. Across the river, a bright red lighthouse stared back at us. Known as Southwest Reef, the lighthouse was built in 1858 and relocated in 1987 from the Atchafalaya Bay to a park in Berwick.

After our walk, we drove the streets admiring the buildings, churches and parks. It was a brief stay, though, as we had several other destinations for the day including the Louisiana State Museum in Patterson. The Wedell-Williams Aviation and Cypress Sawmill Museum showcases two very different occupations that were both integral to this small town.

On one side of the museum, brightly colored airplanes are scattered about both the floor and ceiling. In 1928, pilot Jimmie Wedell and oilman and timber baron Harry Williams joined forces to design aircrafts in Patterson that were faster than the competition. At the announcement of the movie, we all grabbed a seat and waited for the multiple screens to lower across the room. The kids were wide-eyed as planes raced from screen to screen and simulated wind blew in our faces. Wedell and Williams were daredevils of their time who used their fearless talents to revolutionize the aviation industry.

Across the lobby, the cypress sawmill museum tells the industry’s story through pictures, giant logs and, if possible, even larger saws. Louisiana played a critical role in the country’s logging industry, and at one time, Patterson was home to the largest sawmill in the world. It was both amazing and eye-opening, and exactly the right size for the attention spans of our kiddos. We had just wrapped up our tour when they scooted out the front door to investigate the crawfish homes on the front lawn, oblivious to the jet mounted just above their heads.

Down the road in Franklin, we took a whirlwind tour of the downtown, which boasts over 400 historic structures. I have to say I have never seen so many historic signs all standing in one place. We immensely enjoyed the scenic main street, filled with shops and picturesque light poles. Spanning out on either side were pristine white mansions, shrouded in a canopy of moss-covered live oaks. One block away, the much-talked-about Bayou Teche flows past the homes, adding to the laid back, Southern feel already emanating from the town.

It was nearly 3 o’clock by the time we arrived at Avery Island, paying our dollar toll to cross the bridge to enter Tabasco territory. Home to the McIlhenny hot sauce empire, Avery Island sits on one of five salt domes found in this part of Louisiana. They say that the salt here is “as deep as Mount Everest is tall,” a mind boggling thought. The factory was closed the day we visited, but we were still able to tour the facility that strongly smelled of the spicy sauce. The kids were thrilled when the tour guide gave them samples of miniature Tabasco bottles, which have now taken a spot of fame in their own collections at home.

Aside from Tabasco, Avery Island is home to the wild and beautiful Jungle Gardens. A driving tour through the 170-acre gardens brought us past alligator-filled ponds, an 800-year-old Buddha and countless live oaks, azaleas, camellias and bamboo. Thankfully, the unseasonably cool weather kept the mosquitoes at bay so we could enjoy exploring every inch of the property. It was also the perfect time of year for the nesting snowy egrets, which came in droves to the elevated platforms known as “Bird City.”

All in all, it was probably one of our most successful adventures already, but we added one final stop to complete the tour. On the return drive, we veered off south of Centerville to enter the Bayou Teche National Wildlife Refuge, established in part to protect Louisiana’s black bear population. While we weren’t looking for bears, we were intrigued by the Garden City boardwalk trail, which we never would have found without this map. We parked by the levee and walked the short distance to an even shorter boardwalk through the swamp. The water underneath was eerily still, clogged with vegetation in this thriving forest; yet the trees overhead were alive with songbirds, each twilling a different tune and flitting about from branch to branch in a blur of colors. We paused a moment to admire them all before climbing back in the car for the return trip home.