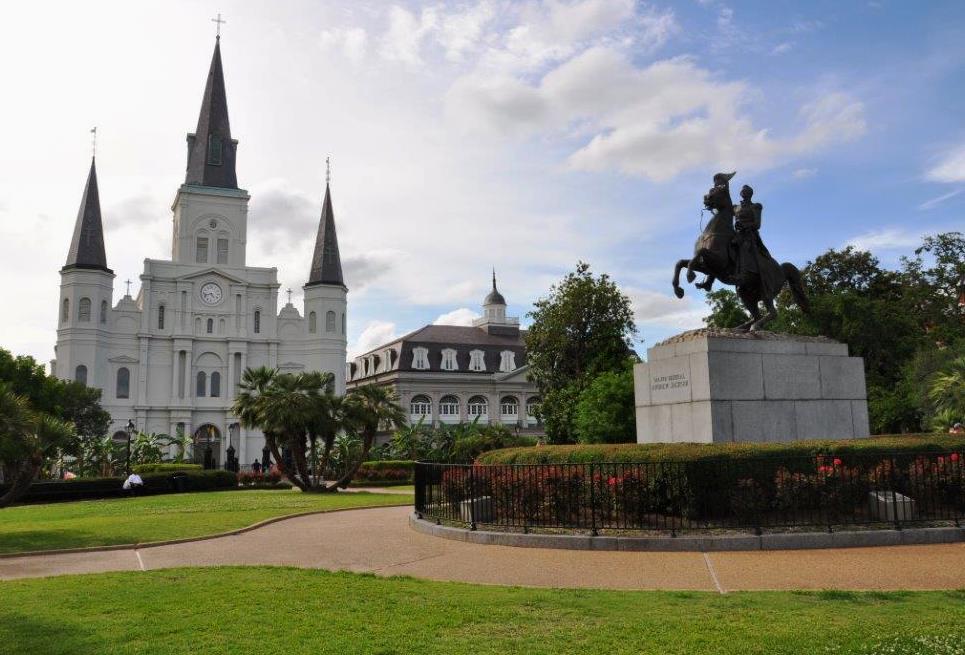 On a coveted three day holiday weekend, t-ball and birthday parties kept us tied to the city, so we used the extra day to explore our hometown. It’s so easy to settle into work and school routines during the week, and take off exploring the unique small towns and parishes on our days off. Yet, I also find that we often forget how interesting our own city of New Orleans is, so we donned our tourist hats and headed to the French Quarter.

Being a local has a few perks, such as knowing to park at the foot of Canal Street at the Shops at Canal Place. We spent five minutes buying the kids a muffin at Starbucks, and then immediately took our parking ticket to the Concierge to be validated (a nice savings in parking fees). Another perk was catching half-price tickets to the paddlewheeler Creole Queen on Travelzoo – all the motivation we needed to try out the river cruise.

We walked the short distance to the boat’s dock and secured our tickets for the daily excursion. The line to board was already wrapped around the side of the Riverwalk, and with one glance at the kids, we knew they were not going to wait. So we instead strolled along the river, watching the massive ships go to and from the busiest port complex in the world. We returned as the last of the passengers took their group photo and passed through security. The downside of waiting to the end was no more available seats on the ship’s deck, but seeing as our two- and five-year-old rarely sit for long, it wasn’t that big of a deal.

We watched as they unwound the ropes holding the boat to the dock and started up the paddlewheel, slowly propelling us out into the middle of the river. Inside people were lining up for hot food and cold drinks, while we toured the boat, investigating the view from every floor and side. A narrator pointed out memorable locations, and the kids discovered hiding places under overhanging decks and built-in “slides” next to indoor stairways. We relished in the breeze counteracting the hot sun, and hid in the shadows when we needed a break. Before long, we passed the Bywater, the Industrial Canal and the Louisiana National Guard’s headquarters at Jackson Barracks on our way south to Chalmette Battlefield in St. Bernard Parish.

As many times as we’ve walked the grounds and toured the home at this National Historical Park, we

had never arrived via the river and never visited on a day when costumed living historians had set up camp on the property. We learned how young ladies looked “graceful” while playing games, explored a tent and common items carried by 1815 soldiers and watched musket firing demonstrations that had our youngest shouting “No!” at the volunteers. Meanwhile, our oldest, Charles, was anxiously listening for the one long and two short whistles that would signal our five minutes to reboard. As soon as they blew, he took off running toward the boat, warning us he would leave us behind if we didn’t make it back in time.

The kids were tired when we finally arrived back at port, so we popped them in the strollers and let them relax as we walked along the river down into the heart of the Quarter to Cafe du Monde. Once again, the line for outdoor seating was stretched far out beyond the famous cafe, but we strolled right past them and entered the air conditioned indoor area and grabbed one of several empty tables.  Here, we re-energized with cafe au lait, and the kids perked up with a great deal of powdered sugar on top of their beignets. You could sense the sugar settling into their system, sending jolts of energy through every inch of their tiny bodies.

Rearing to go, we crossed the street to Jackson Square, greeting the mules lined up waiting to lead
buggy tours. While August “neighed” at them, Charles spotted a balloon man and scored them both balloon swords, which came in quite handy for the sword fight that ensued around the statue of Andrew Jackson. The Quarter was alive with music and street performers, brass bands and cheering crowds. A wedding party paused to snap photos outside St. Louis Cathedral before the bride took a deep breath and entered the church doors. We took it all in for a while, venturing around back of the Cathedral to investigate the artists there and savoring the vibrancy for which New Orleans is known.

When the musicians paused, we took our cue and headed up Chartres to the Napoleon House for a dinner of shrimp remoulade and red beans and rice for the kids. Paul and I topped it off with a Pimms Cup, a light, summer drink, and reminisced about our own wedding reception held upstairs here more than 10 years ago. Built in 1797, the house was offered in 1821 as an escape to exiled Napoleon. Although the French leader never made it to Louisiana, the restaurant and bar today pay homage to him through paintings, statues and various decorations all depicting Napoleon and his life.