On the Hunt for Dinosaurs…and a Hike at Lake Martin 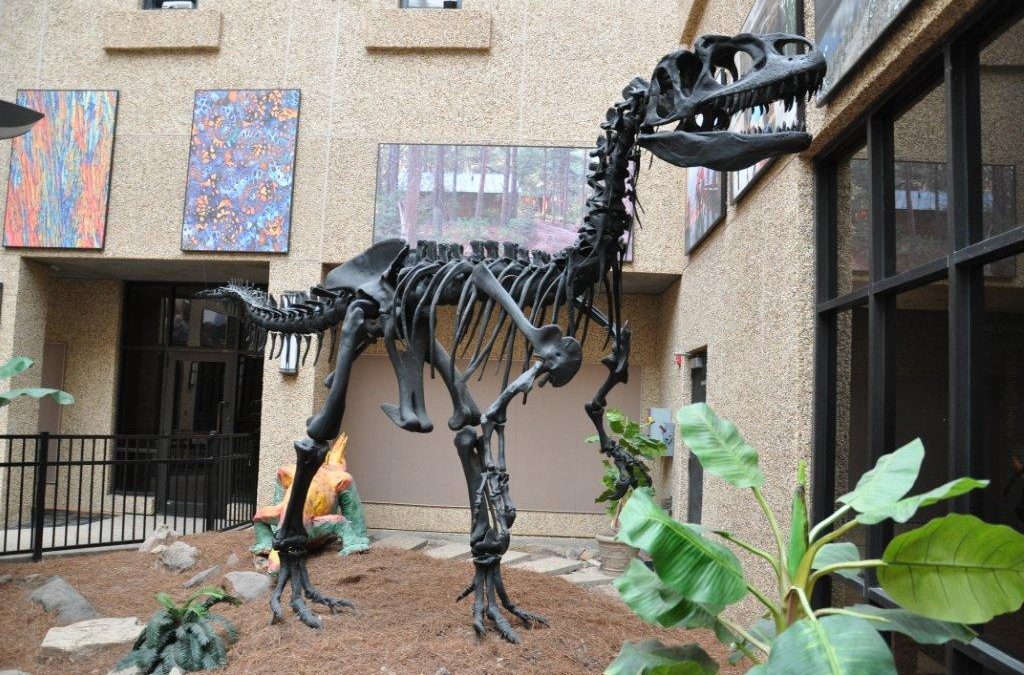 Louisiana is not known for dinosaurs – that much I have learned through my Internet searching. Now Wyoming, Colorado and the Dakotas, they’re a different story. Unfortunately the pleads of a three-year-old are not compelling enough to make me drive 26 hours to view a bunch of skeletons. Lucky for him, and the rest of our family, the Lafayette Science Museum is featuring the American Museum of Natural History’s traveling “Dinosaurs” exhibit.

The drive is still a bit much to make without stopping, so we planned a layover at a friend’s house in Baton Rouge. While in town, we couldn’t pass up a glimpse of LSU’s Mike the Tiger, and the trip to campus reminded us of old anthropology classes in the Howe Russell building and the fossils and rocks on display there.

It promised to be a great “starting off” site for our dinosaur adventures, but when we entered the front doors, Charles nearly squealed with delight at the sight before us. Although the child can’t read, he instantly spouted out that this skeleton on display was “an allosaurus – a carnivore that walked on two feet and had three fingers, not two like T-Rex.” (I must say, I will never understand his obsession with the fingers.) The discovery kept us occupied for quite some time, and Charles discussed the similarities and differences of dinosaurs in lengthy detail well into the night.

The next morning we moved on to Lafayette and headed into the heart of downtown. Our first stop was brunch at The French Press, where we gorged ourselves on the Cajun Benedict: toasted French bread, Hebert’s boudin and two poached-medium eggs topped with chicken and andouille gumbo and fresh scallions. Shortly after, we waddled across the Parc Sans Souci toward the Lafayette Science Museum.

While the planetarium is closed for a digital upgrade, the main attraction until March 11 is the “Dinosaurs: Ancient Fossils, New Discoveries” exhibit. The $5 tickets seemed like a bargain when we entered the far hall and came face to face with a giant T-Rex skeleton (complete with two fingers on each hand). He beckoned us inside to explore a life-sized steel and fiberglass apatosaurus, fossilized footprints and a diorama of eastern Asia as it looked 130 million years ago. After making two rounds through the displays, we grabbed some coloring sheets at the end and walked out the doors. I paused in confusion as we exited – what, no gift shop? Although a huge missed opportunity for the museum, it was a lifesaver for us, as gift shops almost always end in meltdowns.

The afternoon’s adventures winded down with a short drive out into the countryside and a leisurely stroll through the Nature Conservancy’s Cypress Island Preserve at Lake Martin. A loop boardwalk and levee trail offered prime glimpses into the moss-covered, cypress tupelo swamp that serves as a bird haven in late spring. Sunsets are reportedly divine at this picturesque spot, and the lake comes to life when thousands of herons, egrets and roseate spoonbills make this their home during nesting season. The area was scarcely occupied when we visited, though, and I left with the impression that we had found a jewel tucked away inside the state.