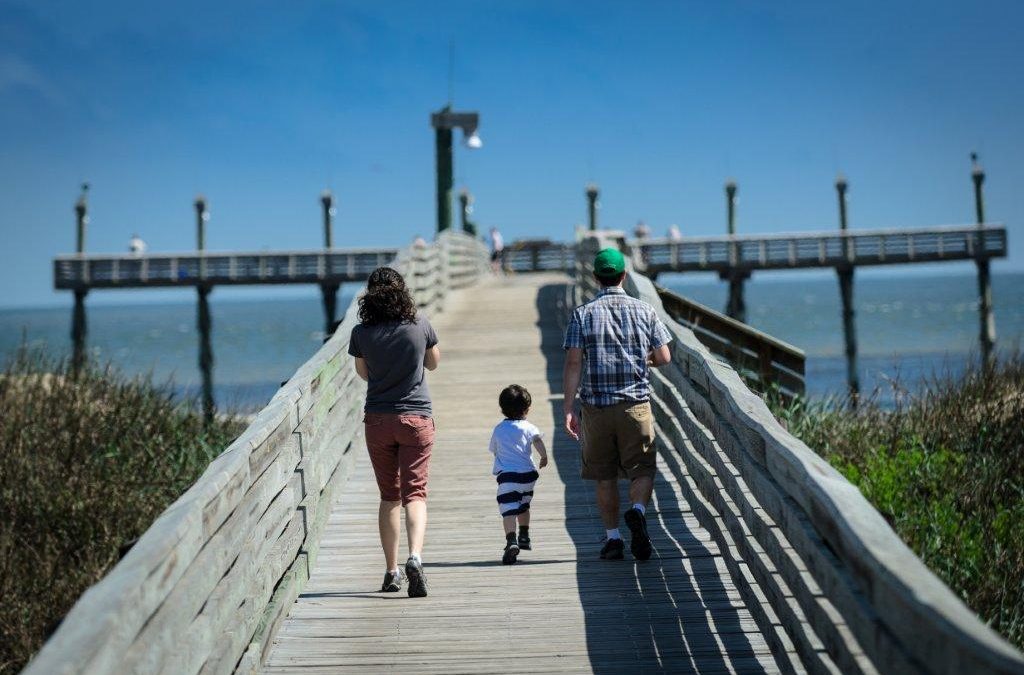 It’s amazing how much can change in a year. Last April, we visited Grand Isle for the annual Migratory Bird Festival, an event the whole island embraces as residents open their yards to birding enthusiasts. The island was bustling with activity, but some of the key attractions – such as the state park’s beaches – were closed due to tar balls lingering on the sand after the BP Oil Spill. Fast forward to 2012 and the sand is cleaner than ever and children were even playing in the ocean waters.

It’s a hefty drive for us – two and a half hours from New Orleans – so we scooted out of the house at 6:30 a.m. to make it in plenty of time for our 9:30 a.m. chartered fishing appointment. Poor August had to hang back with the grandparents, but Charles was giddy with thoughts of his day in the limelight. On the boat, our host Pat Bellanger took us to some of the best fishing spots around the island. It was exhilarating scaling the waves in the Gulf while porpoises played hide and seek around us.

Our guide offered us prime views of Fort Livingston, where Charles’ imagination was captured with thoughts of buried pirate treasure. I initially wondered if the trip might be too much for the four year old, but he reveled in being our “shrimp boy” – providing bait whenever needed – and gained a new best friend in the striped sheephead we reeled in. (I didn’t have the heart to tell him that the fish he was singing to “sleep” was soon going to be chopped up for our dinner.)

Before heading back to dock, we were treated to a spin around Queen Bess Island, better known to the locals as Bird Island. It was here, amidst hundreds of nesting brown pelicans, that we caught site of hot pink wings flapping in the wind and I saw my first of many roseate spoonbills. These amazingly colorful birds did their best to hide within the recesses of the island, while the pelicans made a great showing of flying about, boldly flaunting their triumph over the oil that once threatened to destroy them and their habitat. It was a place I never knew existed, and its brilliance made me question what else I have missed seeing in the world.

Back on land, a voracious appetite had overtaken us, and we tried the poboys (our favorite traveling food) at the Starfish Restaurant. They loaded us up with seafood, and we left with full bellies and a renewed urge to see more of the island.

The day was getting warmer when we entered Grand Isle State Park, and we tossed on some shorts and kicked off our shoes to take a walk. We made our way down the long stretch of sand toward the Gulf and dipped our feet in the lukewarm waters while Charles attempted to keep his beach ball from blowing away in the wind. A particularly strong gust sent the ball all the way back toward the grassy sand dunes, which turned out to be a stroke of good luck as it landed right beside a patch of moon snails waiting to be scooped up.

Feeling sun kissed, we next drove to the shady hiking trail maintained by the Nature Conservancy. Walking along the Lafitte Woods Nature Preserve, we scoped out the path that would soon be teeming with amateur and professional birders searching out the rarest migrating birds during the Migratory Bird Festival April 20-22.

As the sun settled into the evening sky, we made one last stop on our way out at Elmer’s Island Wildlife Refuge. A long, bumpy road snakes through the marsh, taking you from Highway 1 to the sand-covered island. For those with four-wheel drive, you can take your car out onto the sand and park right up at the water’s edge. Even in a Jeep, though, we chose to play it safe and stop at the island’s entrance.  We took one last leisurely walk, marveling at the man-of-wars washed up on shore, before snapping  a few parting pictures of pelicans flying over the sunset.