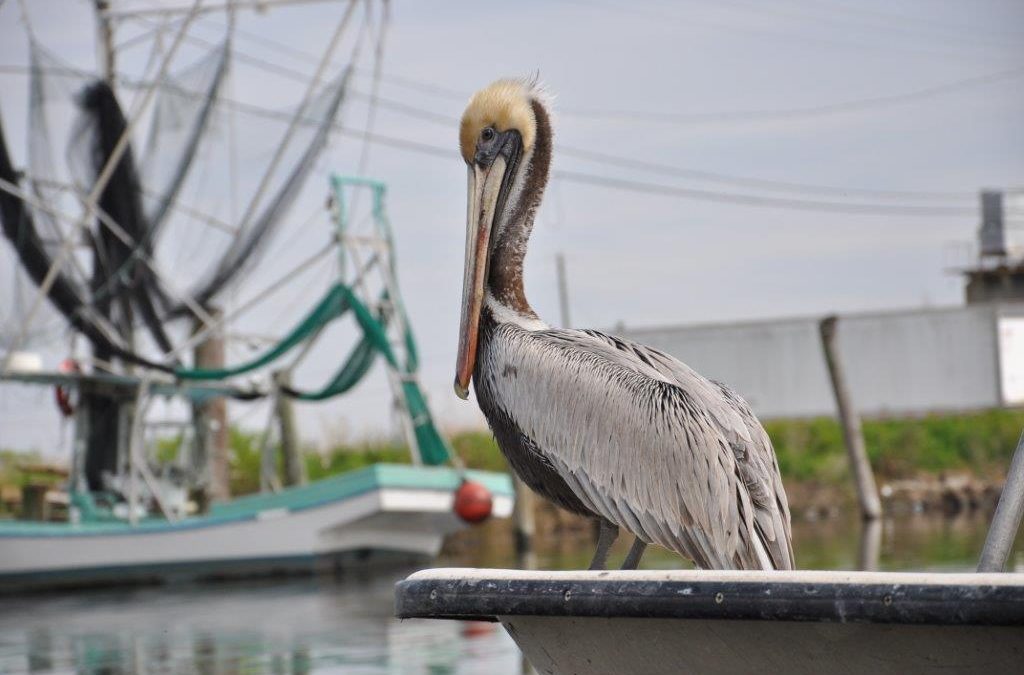 Nearly two years ago, we drove the San Bernardo Scenic Byway through St. Bernard Parish, headed for the Chalmette Battlefield and the Los Islenos Fiesta. This weekend we returned to hit a few spots we had missed on our initial journey, starting with Old Arabi and finishing in Shell Beach where another Louisiana roadway abruptly ends at a large body of water.

As soon as you cross into St. Bernard Parish, you reach the Old Arabi Historic District. A quick drive up and down the roads leads past a number of historic sites, such as the “Andy Griffith-style” jail built in 1911. The beautifully designed Maumus Center, St. Bernard’s first high school that later served as a community center, was gutted and undergoing a massive overhaul that would undoubtedly return this building to its previous splendor.

One of the most fascinating landmarks in Old Arabi is LeBeau Plantation, an 1854 mansion boarded up and presiding over a large open field. The very sight of it conjures up ideas of ghost stories and tales untold. Down the street, however, the Greek Revival Cavaroc House appears in pristine condition at the end of a row of majestic palm trees. The two homes can’t be more different, though. While one stands in near ruin yet proudly displayed for photographs, the other is a bright gem next to the industrialized Domino Sugar Refinery yet tightly guarded against any would-be sightseers. In fact, try to take a picture of this mansion, and you’ll be tracked down, instructed to delete all your photos and have your license plate number recorded. I’m talking hyper-security.

So we carried on, following the scenic byway past the Chalmette National Historic Park and National Cemetery and under a lane of live oaks known as the Dockville Oaks. When the main road split and headed east, we turned right and continued alongside the Mississippi River to St. Bernard State Park. Letting the kids run out some energy, we started with a short nature trail linking the picnic area to the swimming pool, a top attraction during the hot summer months. Luckily, they were in the mood to run because one pause and the mosquitoes attacked. We escaped quickly and found safety in the open picnic area, where we ate our PB&J sandwiches next to a very curious lizard. Halfway through the gourmet meal, the kids spotted the playground and went off to climb, jump and make sand castles–in between sneaking around poles to “spy” on the girls celebrating a birthday party.

It was a nice break before climbing back in the car and backtracking our way to the byway again. We soon approached the Old Courthouse, an impressive building for any city, but even more so being located in the largely rural section of the parish. Just past the courthouse, a long line of people and the flickering lights of carnival rides alerted us that we had once again visited during the Los Islenos Fiesta. We were tempted to stop but chose to continue on to our destination of Shell Beach, the tiny fishing community we had not reached previously because the road was closed. Alas, a few minutes later and we discovered that the road was still closed two years later. This time, however, we were not so easily thwarted, and instead turned the car around and returned west until we found a crossover to Highway 46, a parallel route to the byway.

The highway bypassed the small towns and provided a quicker route to Florissant Highway, the far-reaching road to Shell Beach and Hopedale. Ruins of homes, vehicles and bare, dead trees stood as hurricane casualties, leaving the eerie impression that we were approaching nothing more than an abandoned village. And then the scenery changed and a waterway stacked with colorful boats led to a thriving, vibrant community. Pelicans guided the last few miles of our drive until we parked in front a memorial dedicated to those who died during Hurricane Katrina. A large cross bearing the face of Jesus was rooted in the waters before us, and a plaque listed the names of the St. Bernard residents who passed.

Climbing out of the car, I mistakenly thought ash was falling from the sky around me. It only took a moment to realize it was a flurry of biting gnats. A family, with every inch of their bodies covered with clothing, was fishing and crabbing here, and the birds sat patiently awaiting their next catch. In the distance, the remains of a large fort was oddly out of place floating above a sea of marsh grass. While I swatted the bugs, the kids seemed oblivious, instead chasing birds and collecting oyster shells before we gave up and retreated to the car.

Our final stop was Sebastopol Plantation, a place we had fond memories of from our previous visit. We passed through the gate thinking we would soon see owner Alberta Lewis, who would gladly let the boys marvel at the chicken coop. Instead, we found her son, who broke the news that his mother had passed away. However, he was just as eager to let us roam the property. Since our last visit, and before Alberta had died, she had acquired a set of turkeys to add to her collection of chickens, roosters and peacocks. Much larger than I expected, the male turkey strutted and shimmied all around us, preparing for a showdown with our four-year-old, who was only slightly taller than the bird. It was the perfect ending to our day’s adventures and left us with much to talk about later.