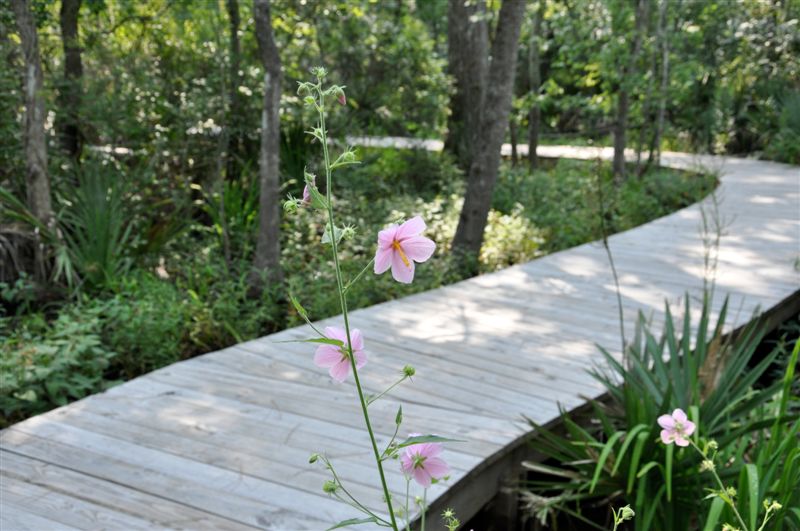 6:15 a.m. and both kids were up and rearing to go. Charles was pulling on his shoes while asking me in the sweetest toddler voice possible, “Mommy, can we go on an adventure today?” August squealed in agreement. I checked the temperature, and it was already 80 degrees out and rising rapidly.

Over bowls of cereal, we struggled with our obvious dilemma–where could we go that was outside the city yet close enough to explore before the afternoon heat fried us all.  “How about Camp Salmen?” Paul suggested, and off we went across the lake toward Slidell.

Home to boy scouts for nearly 60 years, Camp Salmen was later acquired by St. Tammany Parish and is undergoing a transformation into a nature park. As we stepped out into the baking heat, scenic Bayou Liberty beckoned us over to its cooling waters.

With every step we took forward, the ground seemed to come alive around us. Enormous grasshoppers  circled our feet, and Charles thought we had brought him to Heaven. Overcome with both fear and excitement, he was shaking each time he reached his small fingers down to catch another one. Before we knew it, we had a Ziploc bag full of the black and red-striped insects.

The poor critters were carried on a tour across the property, from the boardwalk by the bayou to the garden-bed ruins. We made it through two separate trails before succumbing to the heat and running through a nearby sprinkler while retreating to the car. Our tour was enough to show that the parish has great plans for this work-in-progress park, which promises to be one of the most scenic sites in St. Tammany.

After a quick detour to the Dollar Store to buy another bug catcher, we stopped off in Old Towne Slidell for a burger and fried pickles at the Times Grill. The restaurant is located on Front Street, which runs along Bayou Bonfouca. Old Towne houses several antique shops, clothing stores and Heritage Park with its playground, walking paths and boat launch.

For the more adventuresome, Slidell is also the launching site for tours of Honey Island Swamp and The Nature Conservancy’s White Kitchen Preserve. Skipping the swamp tour for today, we did swing by The Nature Conservancy site where a short boardwalk offered a peak into the area’s wetlands as well as a chance to see a bald eagle nest.