The City of Lights: Natchitoches 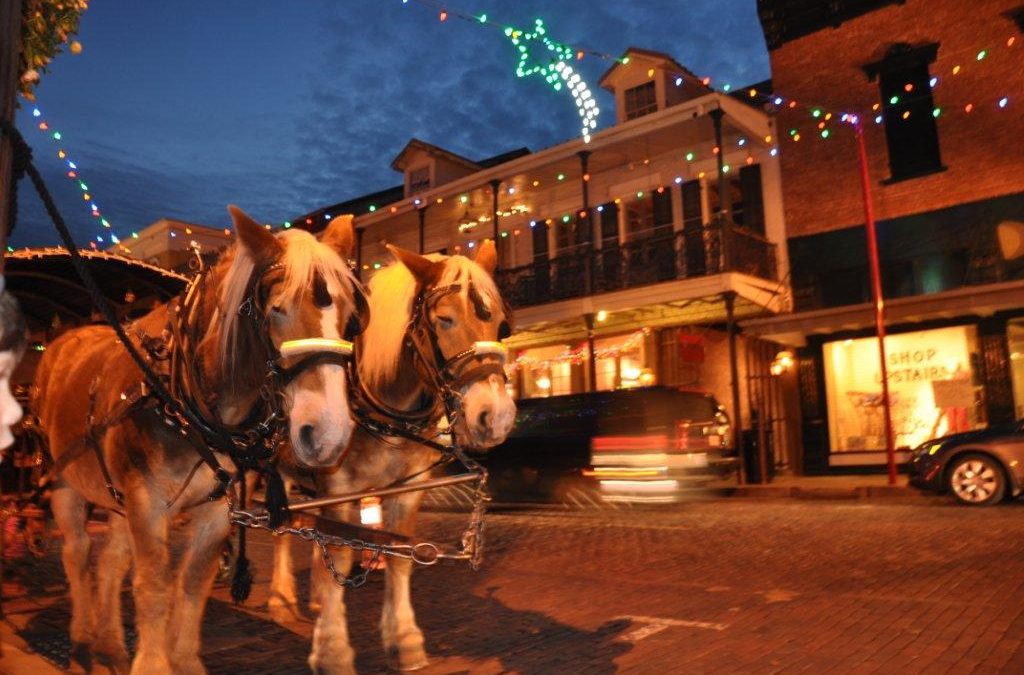 I’ve wanted to visit the city of Natchitoches ever since first hearing about it in college. The town’s name alone implies someplace special and unique. Dubbed the “City of Lights” in honor of its Christmas light show during the holidays, Natchitoches has been featured in all the regional magazines as one of the must-see Southern towns.

I don’t know what took us so long to get there, but we finally booked our hotel and began the four-hour drive northwest over the New Year’s weekend. Despite leaving early, we arrived late Saturday afternoon and took a quick drive-by peak at downtown before heading north to the Grand Ecore Visitor’s Center. Perched on an 80-foot bluff along the Red River, the Visitor Center offers spectacular views as well as a short trail along the bluff’s edge. Inside, various exhibits outline the history of the area, from paleontology and Native Americans to the Civil War and the importance of the Red River. We had made it just before closing time, and the kids had a brief window to try their hands at a simulator where they navigated a ship through a lock in the river.

The gate closed behind us as we left the site to drive back into Natchitoches’ historic district. The evening sky was darkening already, and the city’s lights were blinking on over the street and across the banks of the Cane River Lake. Front Street, with its ornate buildings decorated with elaborate cast iron railings, was packed with people mingling about waiting for the last fireworks show of the holiday season. We mingled among them, window shopping through the Christmas-themed display of the 1863 Kaffie Frederick Hardware Store and peaking down alleys and into intimate restaurants.

Chilled from the winter air, we popped inside the Cane Brake Cafe for a late café au lait, “real” chocolate milk and the finest cupcakes I have ever seen, with a giant magnolia icing flower placed delicately on top. After the boys were re-sugarized, we let them loose along the river, where they danced under the fake snow blowing overhead and chatted with horses waiting for their next buggy tour. We made it the full length of the light show before racing back to the car, blowing warm air on our frost-bitten fingers.

Cruising Second Street to take in more sightseeing, we spotted the famous Lasyone’s Meat Pie Restaurant. Rarely open past three o’clock, the restaurant had made an exception for the festival, and we landed one of the last tables for the night. To say their meat pies were good is a severe understatement. I’ve tried so-called “authentic Natchitoches meat pies” at several festivals in New Orleans, and they pale in comparison to the real thing. These amazing puffs of beef and pork melt in your mouth and are excellent paired with red beans and rice. My only regret is we didn’t buy a dozen frozen ones to bring home with us. The fireworks began as we exited the restaurant, and with my youngest crying in terror, we packed them into the car and found a church parking lot with a front-row view.

Day two in Natchitoches started at the National Fish Hatchery. Although the main hatchery is closed on Sundays, we tested the front door and discovered the aquarium is apparently open all the time. It was a large room lined with oversized fish tanks and a child-sized viewing platform underneath. My four-year-old snapped dozens of pictures, capturing every fish in the place, while August ran from tank to tank pointing and screaming “fish, fish!” I busied myself with the miniature Caddo Indian village depicting how life would have been for the Native Americans who had once thrived here, several of whom were found in a burial ground underneath the hatchery.

Returning to downtown in the daylight, we stopped to view the tops of the recreated 18th century buildings in the Ft. St. Jean Baptiste Historic Site. Unfortunately closed on Sundays, we had to settle with our miniscule look over the back fence and write it on the list for next time. Moving on, we snapped the obligatory photo of the “Steel Magnolias” house as well as pictures of the countless bed and breakfasts up and down nearly every street. Each one was more pristine and beautiful than the previous, and I wondered how anyone chose in which one to stay.

At the end of the Cane Riverbank, we found the Roque House, an 1803, Creole architecture home moved to this location in 1967. The large roof of cypress shingles seems to cloak the building underneath, accented by exposed cypress posts placed right in the ground and filled with “bousillage,” a mixture of mud, Spanish moss and animal hair. Amazingly, the entire home was built with no nails.

Behind the house, a massive iron gate stood partially open, inviting us into a small park with a gentle waterfall to the river. We had the place to ourselves, and the kids chased each other back and forth across the bridges. It was our last stop before taking off for the Cane River Creole National Historical Park and Kisatchie National Forest, a journey worthy of its own separate blog.