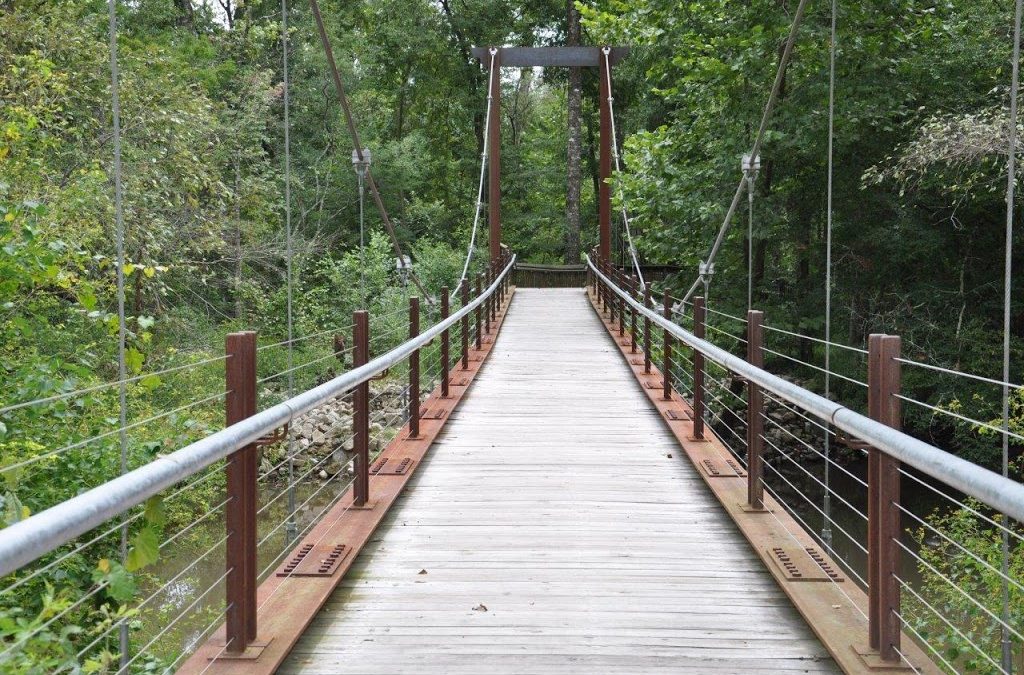 On a whim, we recently decided to take a little drive and check out Tickfaw State Park in Springfield, not far from Ponchatoula and Hammond. It was a scenic journey, north on I-55 through that swampy strip of land sectioning off Lake Maurepas from Lake Pontchartrain. Near Ponchatoula, we headed west into the country, first past some surprisingly large, elegant homes that slowly tapered down to more rustic, rural houses. We passed a few notable spots along the way, including a sign about an old Spanish fort and Springfield’s role in the West Florida Revolution.

Once we arrived at Tickfaw State Park, we headed straight to the Nature Center, which the website says houses an 800-gallon aquarium filled with fish from the Tickfaw River. Unfortunately, a posted sign said the Center was closed on Sundays and Mondays, which I assume is the sad result of state park budget cuts. After a quick round of pouting, we perked ourselves up with a picnic lunch and then set off to discover the boardwalk trail leading out from behind the building.

The route began in a quiet cypress and tupelo swamp, where cypress knees extended high above the murky water and skinks were prolific on the boardwalk’s railings. After a short walk, we emerged on dry land in a more traditional forest of hardwood trees. The kids carefully selected walking sticks from the broken branches scattered about, and then we made our way back to the Nature Center where we peaked in the back window and saw the aquarium.

Farther back in the park, another trail led us along a boardwalk to a bridge over the Tickfaw River. I thought those striped, blue-tailed skinks had been abundant before, but here they seemed to have taken over the place. Our five-year-old could hardly walk two feet before crouching down to sneak up on the next one. The river was muddy and lazy, winding through a serene stand of trees. We ventured along its banks, spotting countless frogs and water turtles and watching for signs of fish before backtracking to the elevated trail.

Our last stop was the playground, a destination our youngest begs for daily and one we always have to save until the end–or else we’ll never make it anyplace else! So while the kids climbed and slid their way up and over the equipment, we rested on the nearby benches. I was nearly certain the splash park would be next up on the list, but a sudden shower had us instead running for the shelter of the car.

To kill time, we drove the streets back toward the entrance, veering off here and there to see what we had missed along the way. This is how we found ourselves at a small pond, walking the circular trail around its perimeter and watching with wide-eyed wonder as the resident alligator swam along beside us.

With alligators on the mind, we had to stop on our way out in Ponchatoula, where Old Hardhide lives in his cage in the middle of downtown. He was relaxing on the side of his pond, silently snoozing while we snapped photos of the kids squatting only a foot away on the opposite side of his chainlink fence. Next door, the old town depot from 1894 beckoned us inside with the promise of arts, crafts and antiques. The kids talked us into buying them toy alligator head grabbers in return for them smiling for a photo in front of the old locomotive across the street.

For the day’s finale, we pulled off the interstate in Manchac for some of Middendorf’s famous thin-fried fish. We ate our fill and followed it up with homemade ice cream before taking our leftover bread outdoors to feed the seagulls. While we stood there on the small pier with birds circling our heads, a train barreled past, flying across its narrow bridge over Lake Maurepas. By now, the kids had discovered the giant sand pit behind the restaurant and set up shop next to the palm trees, building tiny villages with toy trucks and buckets. I’ll only say it was “difficult” to persuade them to leave. Yet, as the sun set over the tiny fishing village, reflecting off the water and highlighting the floating lily pads, we all smiled at the beauty of this place that was so perfectly Louisiana.