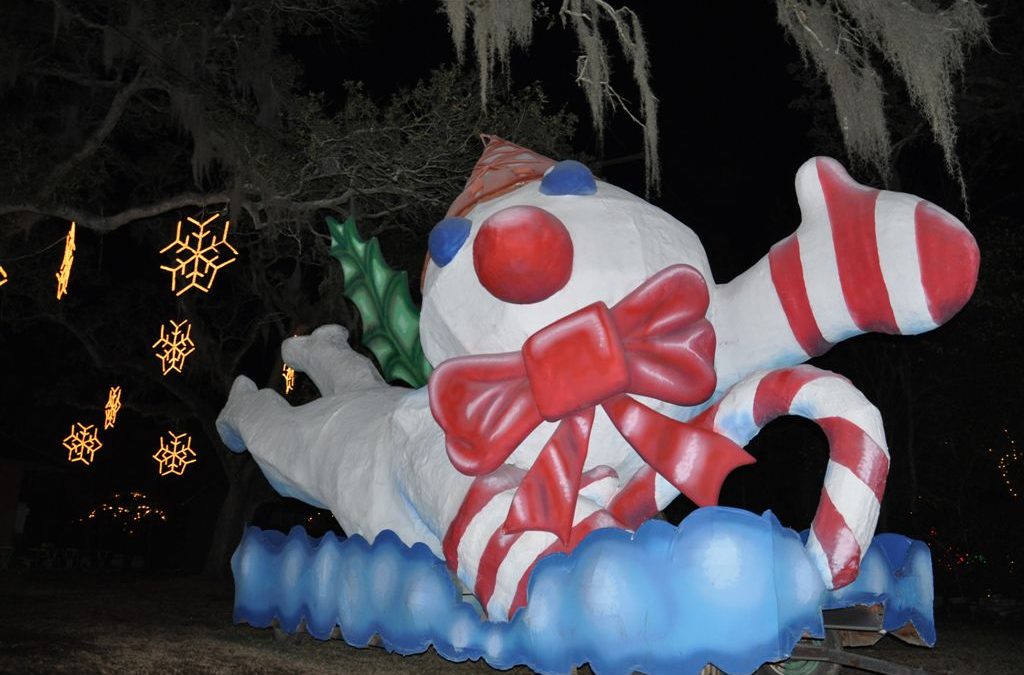 During this magical holiday season, we decided to take the kiddos on a tour of some of the “magic” happening around town. At nearly 4 years old, Charles seemed prepared for his debut into the theater scene. A travelzoo offer got us $11 tickets to Cirque Dreams Holidaze, and although the acrobatic circus show started a bit late in the evening, we couldn’t pass up the deal.

All dressed up in his collared shirt and navy pants, Charles had even allowed us to brush his hair before we set out for the Mahalia Jackson Theater. Armstrong Park’s fountains of water danced in the artificial light, and we half ran (a.k.a. chased down Charles) over the various bridges to see what sculptures had been added since our last visit. When my feet started screaming at the heels I was wearing, I resorted to telling Charles he’d better stick close or else the ogres living behind the trees would get him. I’m sure my stories will one day give this child a complex, but at the time, it convinced him to walk beside us.

He was excited, though, by his big-boy night out, and every little detail enthralled him – right down to his favorite-color-blue lights that lit the stairways to our seats. And the show itself was captivating with fast-paced music, lots of color and twisting and turning acrobats performing nearly impossible feats. From juggling and roller skating to flying and clothes changing, these performers were true artists of their trade and kept us all hanging on the edge of our seats.

Two child star performers particularly impressed Charles, and throughout intermission, he practiced his own moves by balancing both legs and arms on the chairs around us. By the second half, he was reaching his limit though, and after he watched two acts through half-closed lids and sprawled across our laps, Paul and I hoisted him up and exited the theater. Before passing out in his car seat, he gave me a sheepish smile and said, “You know the girl with the thing on her head, she was pretty, mom.”

The evening’s success gave us confidence to take both kids over (a few days later) to City Park’s Celebration in the Oaks. Every inch of the Botanical Gardens, Storyland and Carousel Gardens were covered in “a festival of lights.”

While August ooh’d and aah’d at the colors and pointed at every light his stroller got near, Charles was fixated on the rides in the amusement park. People were zooming in circles on the Scrambler and Tilt-a-Whirl and falling from the sky on the Monkey Jump. He stared wide-eyed, but glued to his seat, too afraid to move an inch…until he spotted the carousel. Now this was his kind of ride, and several minutes later he was up on a horse grinning with delight. Meanwhile, August was crying his eyes out, perhaps scared that his big brother was galloping away into the night.

The lights became more elaborate as you entered the Botanical Gardens, and at one point, they flashed and created fantastic displays illuminating the story of the “Cajun Night Before Christmas.” In other spots, dripping icicles covered massive live oaks and Frosty the Snowman danced under the stars. It was indeed a magical place, and the boys enjoyed every moment of it.