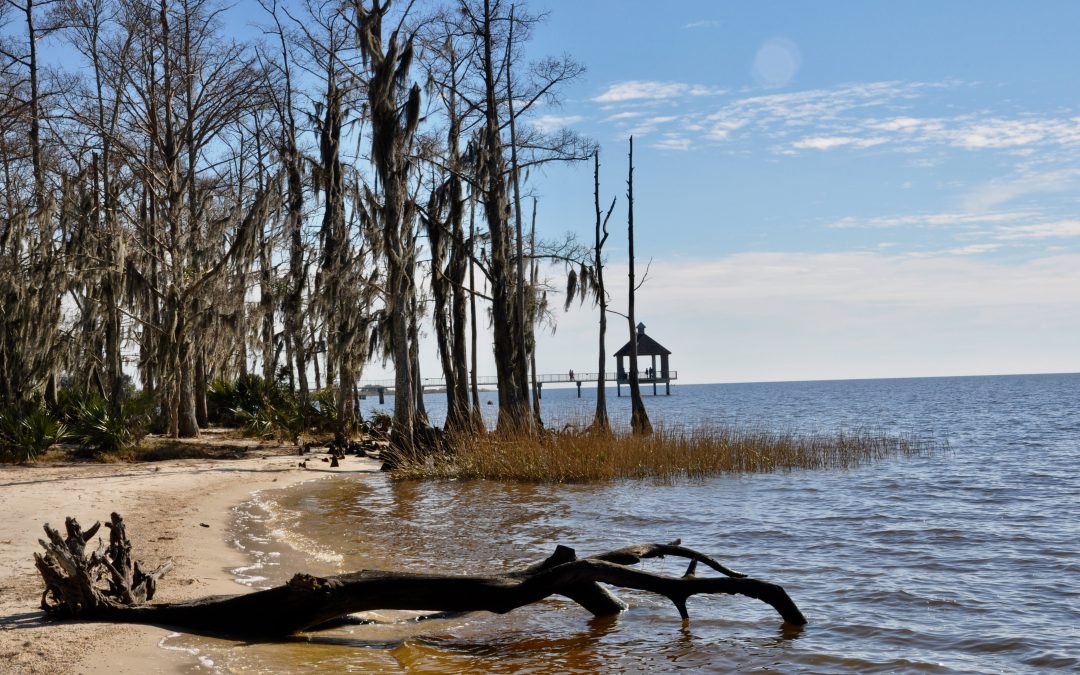 Boys will be boys. That’s the one thing I have discovered to be overwhelmingly true about our three-year-old son, whose favorite color is blue, is obsessed with dinosaurs and thinks the greatest achievement in life is to find every bug that exists on this planet. Put a net in his right hand and a broken telescope in his left, and an adventure is already in the making. Take him to a state park with alligators, snakes and turtles, and his weekend dreams have come true.

Hugging Lake Pontchartrain’s northern shoreline, Fontainebleau State Park is ideal for its close proximity to New Orleans and the prospect of a breeze blowing off the lake. We arrived early, paid our $1 per person fee and drove a quick loop to get the park’s layout. The visitor’s center and sugar mill ruins immediately caught our attention, but after driving across the longest bridge in the world to get here, we needed a long path to stretch our legs.

Parking by the water park and watching a group head off toward the beach, we crossed the open field to the hiking trail. It was well-maintained, providing an easy push for our strollers. A family on bikes cycled past and then we were alone in the forest. Some of the largest dragonflies I’d ever seen were out in full force, seemingly guiding our way to the water ahead.

We had entered the nearly 5-mile trail on its last leg, and it wasn’t long before the trees opened up to a surprisingly tranquil marsh. A long boardwalk stretched out over the water, and the only sounds were jumping fish and the occasional splash of a bird diving for lunch. At the end of the pier, we relaxed on a bench for several minutes, enjoying the peaceful setting until Paul spotted an alligator eyeing us from the dark water below.

It was the heat, rather than the wildlife, that forced us to return the way we had come and take a break in the air conditioning while driving out to see the park’s cabin rentals. Perched on stilts over the water, the large cabins were secluded from the rest of the park and offered uninhibited views of Lake Pontchartrain. The ranger at the visitor center said they sometimes book a year in advance for peak seasons. We picked up a brochure and then explored the center, with its exposed beams, life-sized black bear and 600-year-old dugout canoe. The building offered a brief history of the area and fit in nicely with the sugar mill ruins crumbling outside its back doors.

Not far away in Old Mandeville, we grabbed lunch at The Broken Egg, the birth place of the breakfast and lunch chain called Another Broken Egg. In between playing dinosaurs, the kids managed to find time to devour a stack of pancakes while Paul and I opted for the lunch menu. Afterward, we took a quick look at the lake before heading back for round two of hiking.

The Northlake Nature Center lies across the street from Fontainebleau and offers a bit more of a rustic hiking experience. The strollers jolted over the tree roots as we made our way through the trail. A beaver pond was overrun by the same giant dragonflies we’d seen earlier, and Charles was ecstatic as he chased them down with his bug net. We scared away at least two snakes on our journey and became masters at scaling falling trees blocking the way ahead.

By the end of the day, we left with two sufficiently exhausted kids and a day’s worth of exercise in a natural setting. Of course, we also came away with countless bug bites…