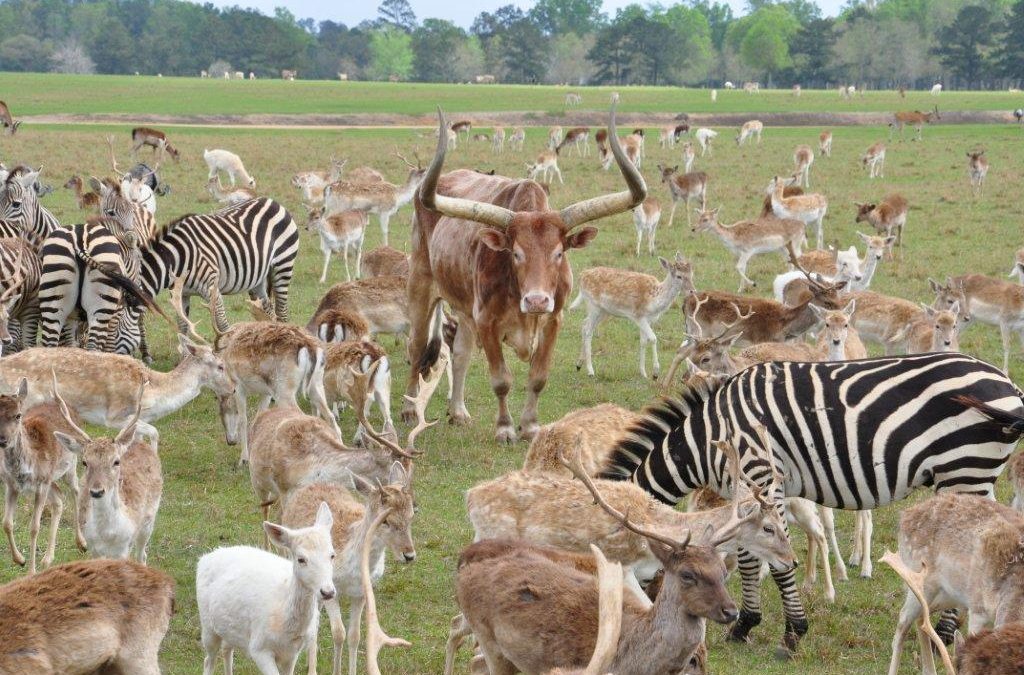 Beyond Lake Pontchartrain and Covington, out past sprawling plant nurseries, lies the Global Wildlife Center in Folsom. We made the trek to the far reaches of the Northshore to see the more than 4,000 exotic animals that reside here at this 900-acre wildlife preserve.

As we drove alongside the property, our anticipation grew as we saw the animals frolicking in the fields before us. When our car turned in the main gate and crossed over the cattle guard, Charles thrust my iphone back into my hands to focus his full attention out the window. Dozens of wild animals walked slowly by, creatures we’d never seen before – not even in storybooks.

We approached the Visitor’s Center, thinking we’d buy tickets for the 1 p.m. tour and eat our PB&J sandwiches by the koi pond while we waited. It turned out the noon tour leaves at a quarter after, though, so we dragged the kids out of the gift shop and boarded the last in a string of covered wagons. Thinking we were on a train, Charles bounced about shouting “All Aboard!” while August clung to me in fear of all the new people around him.

As the “train” lurched forward, though, and we entered the animals’ realm, they both were overcome with pure and utter joy. Armed with our bucket of feed, we were shoveling cups of food into the animals’ mouths, while August was literally squealing with delight. If I hadn’t held him back, I’m almost positive the child would have jumped right in the middle of those four-legged grazers.

The numbers were astonishing, and the varieties of colors and types purely amazing. From the African kudus with their spiraled antlers and the two-humped bactrian camels to the ostrich-like rheas and the frisky pere david deer, we fed, pet and giggled at them all. While the giraffes were standoffish, the zebras were overjoyed with us and begged for our attention. The gentle llamas ate feed right out of my hand, while other animals ran away with the cups they were supposed to be eating out of.

A strong wind blew throughout the thrilling ride, and by the last ten minutes of the hour and a half tour, the boys were (for once in their lives) exhausted. That in itself is a rare feat to accomplish. We topped the trip off by feeding the giant koi and catfish living in the picnic area’s pond while scarfing down our sandwiches.

It was a successful day, and we drove away with full intentions to head back home in triumph. But Charles gave his best puppy-dog look, and with his newly purchased elephant in hand, pleaded for us to continue the adventure. Paul and I are both suckers for that, and after a quick glance at the map, decided to swing past the state’s newest state park – Bogue Chitto. We drove the park’s loop, taking in the scenic views of the gorge and the Bogue Chitto River while letting the car’s movements lull August through an afternoon nap.

As we turned the last curve to exit the park, the toddler awakened and we used the opportunity to hike the gorge trail that had been beckoning to us since we first saw it. A path of leaves and pine needles led the way through the woods to stairs leading deep within the gorge. At the bottom, a boardwalk snaked around through a much wetter landscape, and lizards fled our every step. With lightning speed, Charles actually caught one and vowed to never let it go. Fortunately, the animal was resourceful and squirmed his way free. As the tears came rushing down, we decided the outing was over, and headed home to recoup and plan for the next adventure.